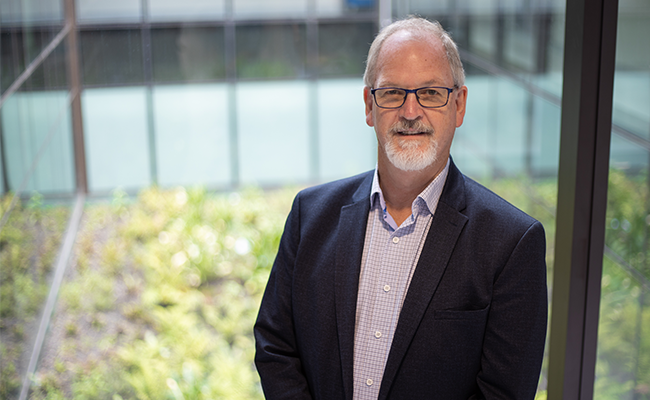 Professor Mike Morgan has come full circle in his career

Professor Michael Morgan says it has been hugely rewarding to finish his full-time working career at Otago.

“New Zealand is my spiritual homeland, and it has been wonderful to come full circle in my career.”

He came out of retirement to take the role of Dean of the Faculty of Dentistry at his alma mater. While he is quite definite this second retirement is his last, he intends to remain involved with the University and dental school “that punches above its weight.”

He says he has thoroughly enjoyed himself, “I wish I was 10 years younger so I could have stayed longer.”

The two years Professor Morgan has served in the role have been important for the Faculty. When he joined, the new hospital facility had been open for six months and work on the adjoining Walsh administration building had not yet been completed.

“I was really setting the path for the hospital, helping to define and to an extent separate the hospital from the Faculty. It is still a work in progress, but we are certainly on the right path. I couldn’t have asked for greater support both from the academic and the shared services crew,” Professor Morgan says.

Professor Morgan leaves confident the Faculty is in good hands, with Professor Paul Cooper as the new Dean.

“Professor Cooper is exactly the right person for the job – his academic skills, research experience, and his connections around the world will stand this place in good stead.”

After graduating from Otago in Dentistry in 1979, Professor Morgan stayed on as a junior lecturer for a year while his wife Eryn completed her studies. He nearly took a different path into private practice but when the purchase of a clinic in Rotorua fell through, he joined public health colleague Clive Wright on a move to Melbourne.

He returned to the University of Melbourne, and completed a PhD in public health, investigating the provision of a tooth decay prevention programme in a non-fluoridated part of Victoria, Australia. Mike finished his career at Melbourne as the Head of the Melbourne Dental School within the Faculty of Medicine, Dentistry and Health Sciences.

This role in Melbourne provided many opportunities to reconnect with the Otago Faculty, through the Alumni Association culminating in being offered the role of Dean just as he was retiring. Then Vice-Chancellor, Professor Harlene Hayne and Pro-Vice Chancellor Health Sciences, Professor Paul Brunton were instrumental to getting him here and he is very grateful.

“It’s also satisfying because I’ve had this feeling of guilt that New Zealand provided my education and all I did was turn around and leave,” Professor Morgan says.

Professor Morgan acknowledges Eryn’s support in coming out of retirement for this role and has promised to do the dishes in perpetuity to show his gratitude. They will now be returning to Melbourne, where Eryn has held a job working from a distance. They have a grandchild in Australia to spoil rotten, and a boat that hasn’t seen the water for two years.

They will remain connected to New Zealand, they have bought a bach near Hawea where they will continue to spend time hosting family and friends – “in addition to showing Australians what real mountains and lakes look like!”

Professor Morgan will also remain connected to the Dental Faculty. A highlight of the return to Otago has been reconnecting with people, both personally and professionally.

He intends to stay actively involved with Otago alumni, as this has been a huge part of this reconnection. He will also be the Honorary Curator of the Henry Forman Atkinson Dental Museum in Melbourne and work closely with the Otago Dental Faculty to strengthen the already well-established links between Melbourne and Otago.