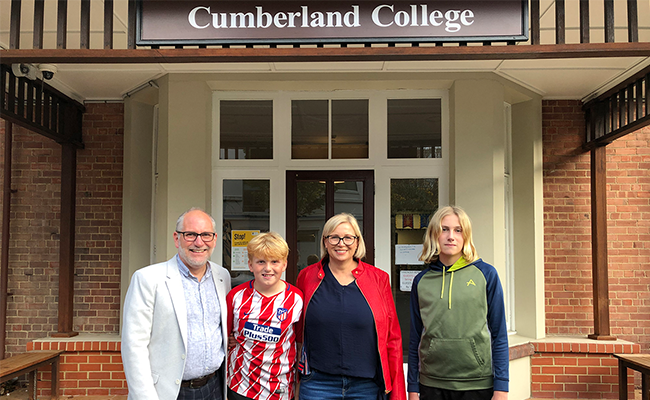 As someone who researches the importance of sleep to diet, Silke Morrison is quick to highlight that she prioritised maintaining a normal sleeping pattern during her PhD, which she graduates with this weekend.

The inspiration for undertaking a Doctorate was seeded while Silke was living at a former Otago postgraduate residential college with her husband and warden Luke Morrison, and their two sons Otto and Timo.

“Immersed in the daily life of Abbey College and surrounded by the range of cultures and research topics of the postgraduate student community was amazing,” Silke says. “I wanted to be part of what they were doing.”

Working at the time as a Professional Practice Fellow for the Department of Human Nutrition’s Dietetics master’s programme, Silke was already closely connected with students’ teaching and learning.

While Silke was mulling over a Doctorate, serendipitously a notice was posted by Professor Rachael Taylor advertising for a PhD student to research sleep and obesity.

“It was one of those life moments where I saw with clarity my path for the next three years. Not only was it the opportunity to work with a researcher I really looked up to, but it also meant I could complete the thesis just before I turned the significant milestone of 50!”.

Silke’s research explored the mechanisms that may be responsible for the impact sleep loss has on weight in children who don’t sleep enough, and involved a study in Dunedin in which 105 healthy children participated.

“We found that children who don’t get enough sleep consume significant more energy from quick and easy to grab foods. The stigma associated with diets mean they can be so hard to change and influence so a public health approach to promote the importance of sleep that can then have a positive flow on effect for a wide range of outcomes such as diet maybe a stealth way forward reducing the risk of obesity in children.”

Now in the process of applying for funding for additional research on the topic, Silke is also working with Professor Taylor in the Department of Medicine on a follow-up study to the prevention of obesity in infants work that’s now in its eleventh year.

Having arrived in New Zealand from Germany as a 23-year-old practice nurse, Silke says it feels pretty special to be graduating with a Doctorate, especially as she’s the first in her family who has had the opportunity to attend university.

“I never saw myself in academia but was drawn into it as I love the process of learning and finding out more. I have gained so much more confidence to undertake an evidence-based approach which has really benefited my clinical work.”
For others considering further study, Silke says that having previous life and work experience and treating the PhD as a full-time job has made the three years of research a lot easier.

“Finding what grabs and interests you is also the key,” Silke adds. “It’s been a huge privilege, but I have also been surrounded with the amazing support of my family and colleagues which I’m very grateful for.”