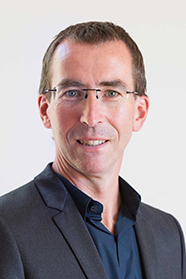 Lasers may conjure images of sci-fi movies and blowing stuff up. But in real life they are the drivers of modern technology, the power tools in the world of light. And they are hiding everywhere. Every email, every cell phone call, every website is encoded into data and sent around the world by laser light. Lasers scan our barcodes at the supermarket. They can be used as cutters, sorters and sensors.

Neil Broderick is an engineer in this hidden world of light. He designs the infrastructure and processes by which light is produced, transported and put to use. Neil was part of a small group of scientists who set up the Dodd-Walls Centre. He helped gather researchers from around New Zealand who were working in the field of light and put together a research programme which drew on their strengths. He is now the DWC Science Team Leader and also the leader of the Photonic Sources and Components Theme, which is all about designing new ways of producing and using laser light.

Neil came to New Zealand in 2011 after completing his PhD at the University of Sydney and working for the world leading Optoelectronics Research Centre in Southampton, UK for over a decade. He is now a Professor of Physics at Auckland University where he does both theoretical and experimental research and collaborates with industry.

At first it is hard to see the connection between all the projects Neil works on. He is currently developing precision cutting tools for manufacturing, a new medical imaging technique and an instrument for keyhole surgery. He is also measuring seismic vibrations in the Southern Alps and investigating the cause of rogue waves in the ocean. The common thread in all these projects is laser technology.

Neil’s particular expertise is knowing how laser light travels through optical fibres, the long transparent flexible fibres used to transmit light around the world. “If you understand these,” he says, “the applications are endless.”

Neil specialises in non-linear optics where light does not follow the usual rules of physics and more complex theory is required. An example of this is when an optical fibre alters the frequency of laser light.

“Normally when you send a light through a fibre the colour stays the same,” Neil explains. “But sometimes when you increase the intensity the colour changes - infrared in, bright green coming out."

Non-linear effects can also be caused by pressure or tension on the fibre, which can lead to data loss, a serious problem.

Much of Neil’s research focuses on understanding non-linear effects and figuring out ways to use them for our benefit. Two current projects involve medical technologies.

Neil is working with Dodd-Walls Principal Investigator, Frederique Vanholsbeeck on an imaging technique to pick out structures of collagen in the skin. They discovered that when you shine an infrared laser at a sample of skin, the collagen glows green. The intensity of green light depends on the orientation and length of the collagen molecules. So this method could offer a quick and easy way to diagnose the severity of burns.

Neil is also working on a force sensor for keyhole surgery with Professor Peter Xu in the University of Auckland’s Engineering Department. When surgeons are injecting into the spinal column or operating close to vital nerves or organs it is very important to know what tissue types they are dealing with. The difference can mean life or death. This project utilises the way the non-linear properties of an optical fibre change according the degree of force or pressure acting on it. These optical force sensors could be incorporated into haptic devices to give surgeons a visceral sense of the tissue they are cutting through.

"Another surprising use for non-linear optics is measuring seismic vibrations in New Zealand's Alpine Fault."

Neil has joined a team of geophysicists from Victoria University to help reveal the forces and processes that have shaped the mountains and wider landscape. In 2014 a large international team of scientists drilled a hole more than a kilometre deep into the Alpine fault, leaving behind an optical fibre the length of the hole. By sending short pulses of laser light down the fibre, Neil can work out the pressure, vibrations and temperature all the way down.

“The results are amazing,” he says. “In most parts of the earth the temperature gets about five degrees hotter every hundred meters. Our results show around ten times that. They think this is because it is a very young fault. As the mountains are being pushed up, they generate heat and they are still cooling down from that.”

Working with lasers offers valuable insights into fundamental laws of physics. The non-linear effects and patterns which Neil observes in optical fibres also emerge in vastly different scales and systems throughout the universe. The beauty of working with light, as opposed to any other medium, is that it is flexible, accessible and easy to observe.

In August 2016 the Dodd Walls Centre hosted a joint-conference in Dresden with the Max Planck Institute, the world leading centre for theoretical physics. It attracted fifty speakers and attendants from all around the world. The focus was non-linear optics. But many people came to learn about the fundamental principles that apply to so many other systems.

Recently Neil has been investigating the cause of rogue waves - massive ocean waves that seem to rise out of nowhere and destroy ships.

“One of the nice things about optical systems is that everything tends to happen very fast,” Neil explains. “If you’re looking for rogue waves in the ocean you might see one every ten years. When we look at optical rogue waves we might see three or four per second. If you’re going to build a boat or a bridge or an oil platform you really need to know how likely these things are to occur. The more events you have, the more accurately you can predict. The optical systems allow us to gather that information.”

Neil had only been in his job at Auckland University a week when he found himself in a meeting with local company Southern Photonics asking if he could develop fibre lasers for the manufacturing industry. Eight or nine months later the lasers were in their boxes being shipped around the world.

The lasers he produces are incorporated into larger systems, which amplify the power to several hundred Watts and cut through almost any material with micrometre precision. One of the major markets is the microprocessor industry where the finer you can cut a computer chip, the less the cost. Since 2011 Neil has been Southern Photonics Principal Scientist and has gone on to make tenfold improvements to the power and pulsewidth of the lasers.

Neil also recently received funding to develop new fibre lasers for The Photon Factory, a laser lab run by Dodd-Walls Principle Investigator Cather Simpson. Here they could be used for commercial applications such as sorting sperm for the dairy industry or cutting bone for precision surgery.

Many of the projects Neil is working on were sparked by the process of setting up the Dodd-Walls Centre. Others came later as the centre became known for working with light.

“This means we’re talking and working with people we wouldn’t have known before,” says Neil. We’re getting better ideas and it’s more exciting.”