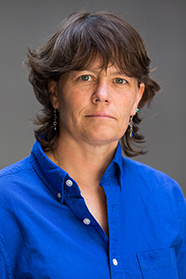 Professor Cather Simpson is pioneering a new way of doing science. In her team at the Photon Factory at Auckland University students delve into pure science and also work with industry. They get to invent their own career paths, guide their own research into industry and see it make a difference in the world. They don’t work alone. They collaborate. Chemists, biologists, physicists and engineers help solve each other’s problems. There’s an even mix of genders and people talk about their feelings and respect each other’s views. It’s a whole new type of ecosystem.

Cather arrived at Auckland University in 2007 where she set up the Photon Factory, a laser lab collaborating with industry and scientists all over the world. They specialise in femtosecond lasers, which deliver ultra-short pulses of light and can be used for precision cutting and many other applications. Her start-up company Engender Technologies, which sorts sperm for the dairy industry, recently won the AgTech section of the World Cup Tech challenge in Silicon Valley. It’s the first time an Australasian company has won in this challenge.

Cather was born in Germany to a military family and moved seventeen times before graduating high school. She went to university in the United States intending to become a neurosurgeon but fell in love with Physics during her PhD. She became captivated by the way light interacts with molecules, an obsession which has guided her career ever since.

It hasn’t been easy setting up the Photon Factory. Had she known the challenges she would have to face she may not have accepted the job. She only came to New Zealand because her partner was offered a position as a Shakespeare Scholar at Auckland University. The Dean of Science at Auckland was keen to have her too but there was no funding for setting up a lab to do the type of research she wanted to do.

"In retrospect that period that forced us to say yes to everybody became the foundation of our success. We had to hire engineers. physicists and chemists so we ended up with a versatile multidisciplinary group able to tackle many different things."

“For me,” she said, “it was a big risk. I had just been offered tenure at Case Western University in America. The position came with a budget of millions to set up a lab. My career was on an upward slope.”

The Dean of Science took a huge risk, offering to back a business case to set up a new lab.

“At the time, I had no idea what that meant,” said Cather. “When I started interacting with the university accountant I suddenly realised we would have to make a profit from our research. There was no way a business case would work doing science the way we did in the States.”

It took Cather three years to build connections with industry and set up the lab.

“I’d been saying for years that femtosecond lasers can be useful for other things but I’d never had to prove it,” she said.

To begin with she took any contracts she could get just to pay for their fundamental research.

With a few commercial successes under their belt, the photon factory was developing a reputation for being able to work with industry - to let industry pull them.

“So exciting,” Cather says, “that I get the same goose bumps as when I’m doing my own science. We have now completed three and a half million dollars’ worth of contracts with industry and started up a number of companies. We also have almost twelve million dollars in grants from MBIE to fund our own research.”

Cather is now incredibly glad for the shock that led her to embrace commercial work. She wouldn’t have it any other way.

"An investor in agriculture presented Cather with a problem in dairy farming - what to do with male calves who usually get slaughtered. Cather gave a group of students 48 hours to come up with six ideas for using lasers to sort sperm. One idea was a winner."

The Photon Factory is a very friendly welcoming place. Cather has been deliberate in establishing a culture that supports diversity and creativity and is very careful about maintaining this. She looks for students who are positive and curious. If they don’t ask questions during the lab tour, they’re out. If they only ask about salary or see their science as just a job, they’re out. Gradually the culture has become self-selective. People attract their friends and it grows from there. In such a diverse group it is easy for cliques to form and criticisms to fester. Cather is proactive about pulling these up before they become serious.

She sees her main role as helping students grow in the direction they want to go. She gives them hard challenges and they meet them. For example, the idea for the award-winning Engender Technologies came from an undergraduate student.

The Magic of Molecules and Light

At the heart of Cather’s work is a lifelong obsession for light and the way it interacts with molecules.

Cather discovered this during her PhD and has formed her career around it. She would like to be able to look at a molecule and predict what it’s going to do.

All these molecular processes work because of the interactions between electrons, the tiny negatively charged particles surrounding atoms. It’s one of the weird aspects of quantum physics that electrons don’t behave like normal particles. They spread out, forming different shaped clouds around the atoms that reinforce and cancel each other out just like ripples in water. When light hits the molecule, the electron clouds reconfigure and just like magic, the energy from the light is converted into a different form. All this happens in femtoseconds - that’s billionths of a second. So it’s virtually impossible to observe, unless of course you have a very fast camera! This is exactly what the femtosecond lasers in the Photon Factory are used for. By delivering ultra-short pulses of light they capture glimpses of the molecules as they transform.

Cather is captivated by the beautiful and complex symmetries of these electron clouds.

“If you do puzzles you’ll understand the obsession,” she says. “You know when you’re working on a jigsaw puzzle with only a few pieces left and you stay up all night just to get it finished. These problems are similar to that.”