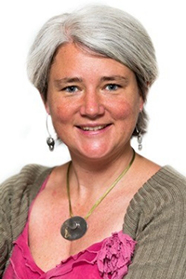 Frederique Vanholsbeeck is head of the University of Auckland’s Bio-photonics group and leader of the Dodd-Walls Sensing and Imaging Theme. As one of only two female investigators out of forty, she is passionate about encouraging women in science and has spearheaded the development of a vision and plan to improve diversity in the Dodd-Walls Centre.

Originally from Belgium, Frederique first studied architecture for two years. “Because I love beautiful and useful things” she says. She switched to applied physics when she saw the possibility of creating devices to solve real-world problems. Her career got off to a flying start when her Masters thesis, modelling airflow through the lungs, was awarded top in the country by the Belgian Physical Society. She went on to work with telecommunications company Alcatel during her PhD developing a novel way to amplify signals in fibre-optic cables; work which resulted in a patent. She came to New Zealand in 2003 to learn English and in 2005 was offered the opportunity to start the Biophotonics group. She now sits at the hub of a large group of students working with laser light to solve important industrial and medical problems.

Having the funding and support of the Dodd-Walls Centre has given her and her partner (fellow DWC investigator Stéphane Coen) a good reason to stay in New Zealand.

“Two years ago I was ready to go back to Belgium because there wasn’t much funding for us here.” Frederique says. “The CoRE funding is one of the reasons I am here now.”

"The basic idea is to fire a laser at a biological sample and measure what reflects back. It is incredible how much information about the structure, function and properties of biological organisms can be gleaned from this."

Biophotonics is all about using light to understand biological and physiological processes.

In 2014 Frederique received almost 3 million dollars in funding from the Ministry of Business, Innovation and Enterprise to develop a new sensing technology using fluorescence spectroscopy to detect bacteria on meat. Currently in the meat industry bacteria is detected by transferring a sample from the meat onto an agar plate and waiting to see what grows. This can take three days, in which time contamination can spread throughout the processing plant, costing huge amounts to recall and sanitise. The new sensing method promises to give a result in minutes. The technology uses fluorescent dye molecules which attach to bacteria in the sample. When exposed to ultraviolet light they glow and through extremely accurate measurement this can be used to tell the concentration of bacteria.

Optical Coherence Tomography is similar to ultrasound. It uses light instead of sound and gives higher resolution images. By sending short laser pulses into the surface layer of biological tissue and measuring how long they take to bounce back, three dimensional images can be created. It is possible to see structures like individual cells as small as a couple of microns and to penetrate millimetres beneath the surface without causing any damage to the tissue.

OCT is commonly used by clinicians to image the eye. Frederique and her group are improving the technique so it can be used to detect the onset of eye diseases such as macular degeneration and diabetic retinopathy which are the main causes of blindness in Western societies. First they have developed lasers which can penetrate deeper beneath the surface. They are also using new techniques to interpret the reflected light, enabling them to detect the stiffness of the tissue, an indicator of disease. The research will greatly improve the value of OCT in detecting and potentially treating eye disease worldwide.

Frederique has recently begun to explore the potential of nonlinear microscopy for medical imaging. She is collaborating with DWC Principal Investigator Neil Broderick to develop a technique for imaging the structure of collagen within the skin. This could offer a quick and easy way to diagnose the severity of burns as collagen molecules break up when skin is burnt. The idea is based on an unusual property of collagen - it glows green under infrared light. The intensity of green light depends on the orientation and length of the collagen molecules. So this could be used to detect the degree of a burn.

Connecting with Industry and Community

The Biophotonics Group has an active and effective outreach programme to industry, students and the public. Frederique recognises the importance of inspiring, encouraging, guiding, and connecting people with an interest in their technology.

She is part of the DWC Industry Group where she helps to forge relationships and create opportunities for students.

“If you do applied science,” she says, “you have to solve a problem that’s real and for that you need to talk to industry. We have to be honest. Only ten percent of PhDs will stay in academia. Doing a project with industry is the best bet to get a job.”

After all, the idea of solving real-world problems is what got Frederique into physics in the first place.