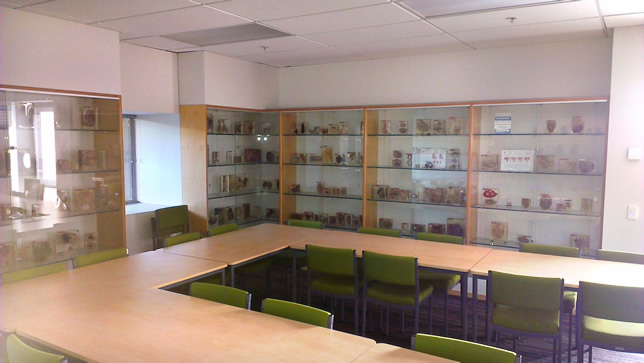 The teaching space within the Drennan Pathology Museum.

The first specimens for this collection were acquired by the Department of Pathology for teaching over 100 years ago. Some of the specimens in the collection date to 1886, and these were probably collected by Dr William Roberts.

Murray Drennan, the first full-time Professor, was appointed in 1916, and these cases were vital to his new teaching method 'case-based learning'. He published on the pathology of goiter in New Zealand (endemic at that time due to a deficiency of dietary iodine) and collected thyroid specimens.

All the specimens are anonymously displayed and come from either surgical resections or post-mortem examinations. Most specimens have a record that includes a brief clinical history and the microscopic findings.

The specimens in this collection are held under the New Zealand Human Tissue Act (1964 and 2008). It is significant for the historical record of many conditions, such as tuberculosis, and for currently-relevant conditions that would not otherwise be accessible, such as rheumatic fever.

Reference: A History of Pathology in New Zealand – Pathology in Dunedin. Academic and Hospital 1885–1970, Private 1960–1991. By DT Roberts. University of Otago Medical Library.