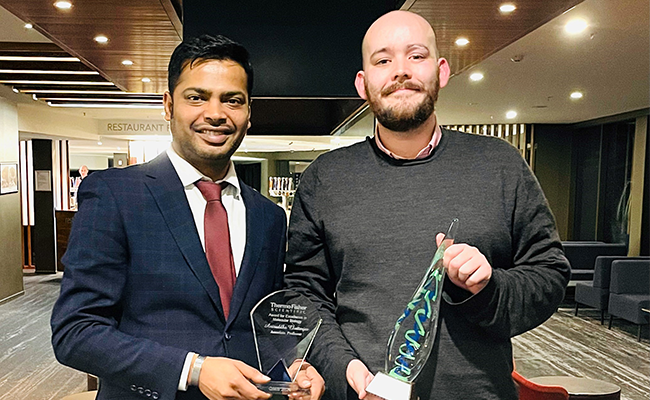 Otago-led research has been nationally recognised at Queenstown Research Week, one of the country’s most significant annual scientific gatherings.

Dr Kiel Hards, formerly of Otago’s Department of Microbiology and Immunology, received the Illumina Emerging Researcher Award for his work on antibiotic resistance.

Associate Professor Chatterjee studies the epigenetics of cancer, particularly how cancer spreads to other organs and becomes aggressive. His lab is currently focusing on identifying and studying the key epigenetics changes in multiple cancer types (lung, colorectal and prostate) to eventually improve health outcomes.

The award was particularly significant for Associate Professor Chatterjee, who in 2015 received the Illumina emerging researcher award.

He was “chuffed and humbled” to now receive the Thermo Fisher Scientific Award and emphasised that his research was a team effort.

“I have seen some amazing people getting the award when I was a junior scientist and thought maybe one day, if I do enough good work, I can achieve this too. So, it’s pretty exciting.”

Associate Professor Chatterjee is a Rutherford Discovery Fellow and Associate Dean of Research at the Dunedin School of Medicine.

Associate Professor Chatterjee has published more than 75 peer-reviewed papers, a number of which he has led, and he is involved in numerous research collaborations within New Zealand and around the world.

Dr Hards’ research identified how the commensal bacteria in the human microbiome (our "good" bacteria) may be able to help opportunistic pathogens (our "bad" bacteria) generate metabolic energy. The work has implications for how we understand antibiotic resistance, and community and hospital acquired infections.

Dr Hards says he worked as part of a wider network of New Zealand researchers focused on the global threat of antibiotic resistance. The award is an excellent opportunity to highlight some of the great microbiology work happening across the country.

“I anticipate that we are at the tipping point of some truly great discoveries.”

Dr Hards now works in the Biosecurity Intelligence Team at the Ministry for Primary Industries in Wellington. The team aims to be an early warning system for offshore threats to biosecurity and Dr Hards says he’s applying a lot of the skills gained through his research work.