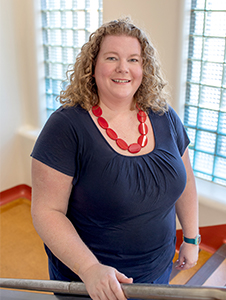 The award is one of the University’s highest research honours and is given to recognise outstanding research performance of early career staff.

Dr Bicknell’s research focuses on understanding how changes in a person’s DNA can impact development and lifetime health. Her particular focus is on single gene disorders of body and brain growth.

Born and raised in the Hawkes Bay’s Havelock North, Dr Bicknell attended Clive Primary School and Havelock North High School. By then her thirst for questioning, learning and science was already well formed.

“I thought I was an angel growing up, but apparently I wasn’t. I just loved getting involved in things, I was always putting my hand up. I wasn’t afraid of that.

“And I loved biology at school. I came down to Otago to do medicine, but halfway through Health Science First Year I realised it wasn’t for me. I’d got hooked by the science.”

From there she made a “conscious shift” to pursue science, enrolling in a Bachelor of Science and gaining first class Honours in genetics.

“I just found it all really interesting, that understanding of how things worked. I enjoyed the anatomy side of it, learning about our bones and how our brain develops, and I loved the genetics, connecting our DNA with the biology.

“With genetics there are just four letters [bases that make up DNA], it’s that simple. To think that basic simplicity leads to the complexity in nature all around us, I mean, how? And it’s that ‘how’ question that inspired me.”

After completing her PhD at Otago in 2007 she moved to the University of Edinburgh for her post-doctoral work. It was a chance to see the world, and a chance to work alongside Professor Andrew Jackson who was studying human genes acting in growth and inflammation. Dr Bicknell says her “natural curiosity” would have ensured she was interested in virtually any subject, but this one proved particularly fascinating.

“It has turned out to be really interesting in that it’s quite a simple concept – what determines our size – but we still don’t fully understand it. For example, you look at mammals; the bumblebee bat weighs just two grams, and the blue whale weighs 150 tonne. But both started from just one cell with a common ancestor, and you luckily never see a bat the size of a blue whale, or vice versa.

“So, there must be controls for this in our instructions. That’s what determines the size. And those instructions, that’s the genetics.”

It is changes in those genetic “instructions” that determine many conditions resulting in size differences among humans too, she says.

Trying to cure these health conditions is often not feasible, she says. It is the quest for knowledge about them that is of great use, for two reasons.

“One, for the families. They get an answer. Some of these conditions are more rare than one in a million, so just getting a genetic answer for the family is actually very powerful. The parents can often feel guilty, wondering whether they’ve done something wrong, when actually it’s just luck.

“Having an answer helps them understand about risks for other family members, and can open doors for therapy and other help. Also, as we find other families with the same spelling mistakes, often from other countries, we can learn from all the families and start to provide better clinical advice about what parents can expect as their child grows.

But research costs money. Since her return to Otago in 2015 Dr Bicknell’s research has been funded by the University of Otago, the Marsden Fund, the Neurological Foundation and the Health Research Council of New Zealand. The quest for continued funding never stops though, and is a process which can be difficult for research in a relatively small field in New Zealand. That makes the recognition that comes from winning the Rowheath Trust Award and Carl Smith Medal so significant, she says.

She also uttered “a wee gasp” when she learned “the incredible calibre” of her fellow awardee, Associate Professor Anne-Marie Jackson from the School of Physical Education, Sport and Exercise Sciences, she says.

“It’s certainly humbling. Then I also thought about my team in the lab, who do so much work. Research is very much a team effort and they should be equally chuffed their efforts are regarded so highly.”

The support of her family, particularly her “endlessly supportive” husband, has been vital, she says. She also singles out her parents for praise.

“An enduring career in research takes drive, resilience and a lot of hard work, and my parents have been such strong role models in instilling these values. I have been so fortunate to have them encouraging me all the way as I try to make the unknown known.”

It is that pursuit of discovery Dr Bicknell wants to be remembered for when she finally signs off on her research career, many decades from now.

“I just hope that through my research in understanding the consequences of changes in our DNA, I would have been able to help in the bigger goal of extracting as much information from someone’s genome as possible, to help understand their development and health throughout their lifetime.

“I just can’t think of what else I’d want to do. It’s addictive, finding something that no one else in the world has found before. You just don’t know where that knowledge could lead.”