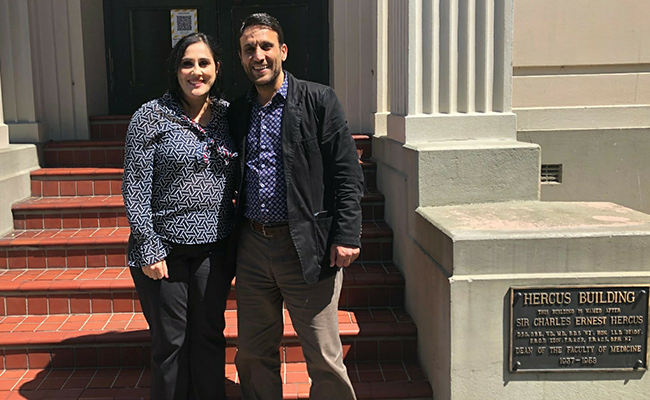 Suzan Almomani and her husband Issam Mayyas both received their PhDs at the University of Otago graduation on 9 December.

Suzan Almomani’s first day in Dunedin was so cold she cried.

Her three young children weren’t very happy either. Back home in Jordan it was just coming into summer and they couldn’t understand how late-May weather could be so chilly.

Six years later, the family is happily settled in the city and getting ready for a big occasion.

Suzan and her husband Issam Mayyas both received their PhDs at the University of Otago graduation on 9 December, a rare event for a married couple.

“It’s going to be fun. It’s a nice achievement together,” says Suzan.

“I didn't know anything about New Zealand, I knew that there was a country called New Zealand, but I hadn’t focussed on searching for it.”

The couple’s route to the Department of Pathology at Otago involved a degree of chance backed up by a decision to follow their instincts.

They wanted to bring up the children – then aged 9, 8 and 5 - in an English-speaking country and were exploring options in the Australia, Canada and the United Kingdom.

Then an alert popped up that international fees for PhD students in New Zealand had been adjusted to be the same as domestic fees.

“I didn't know anything about New Zealand, I knew that there was a country called New Zealand, but I hadn’t focussed on searching for it,” Suzan said.

At the time Suzan was a lecturer at Jordan University of Science and Technology after finishing her degree in Applied Biological Science. Issam was lecturing at the same university in the Faculty of Medicine.

After the inauspicious start that cold May day, Suzan began work on her PhD investigating the epigenetics of preeclampsia.

Issam looked after the children for the first year and then started his PhD in cancer epigenetics.

“It was kind of a big responsibility especially because we were doing lab work. Issam needed to go at 3pm to pick up the kids. He’d stay with them for a while and then we would shift. Sometimes we needed to organise our experiments later,”

With some unexpected delays to Suzan’s thesis approval, the timing has worked out that they completed their PhDs at the same time.

The only sadness is that the pandemic has prevented family from travelling to witness the ceremony.

“My mum was planning to come for my graduation but with COVID, it's become too difficult,” says Suzan.

Suzan now has fulltime work on a project with Professor Mike Eccles and Dr Aniruddha Chatterjee in the Pathology Department while Issam been doing laboratory demonstrating in the department since he submitted.

“We really love it here. People are very humble and we feel very supported here.”