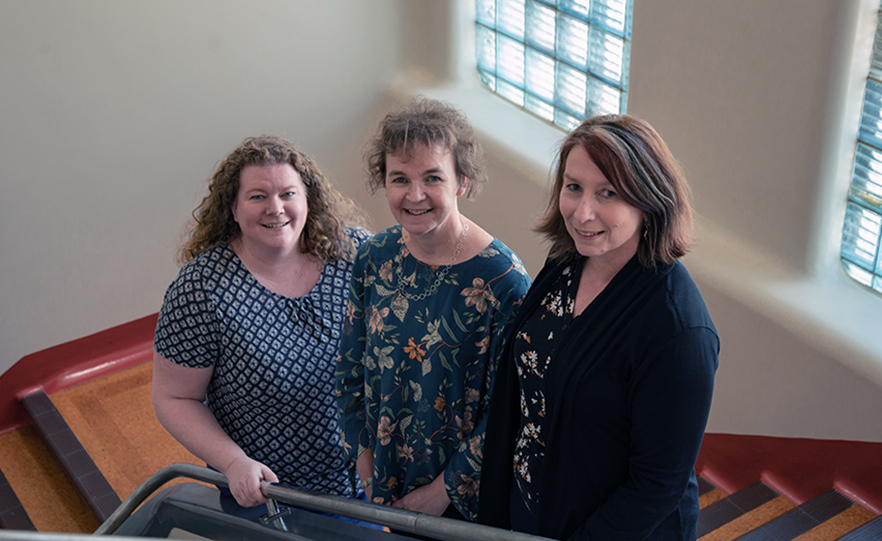 Pathology is so hot right now.

Almost a quarter of the $17.5 million in Marsden funding recently awarded to the University of Otago was shared among five researchers in the Dunedin and Christchurch based Pathology departments.

These five scientists are a diverse bunch who upend the popular image of pathologists spending their day in white coats staring at tissue samples.

“When people think of pathology they think it’s cutting up dead people and looking at samples down a microscope, but it’s actually understanding processes and systems so that we can interpret disease when we see it,” explains Professor Julia Horsfield.

In essence, pathology is a broad field seeking to answer fundamental questions about how humans work. And the answers to these questions can have a profound impact on our understanding of human development, disease and genetic disorders.

All of these research teams include postgraduate research students, who get the chance to work and learn while tackling important problems with cutting edge approaches.

The researchers describe Marsdens as “magical unicorn” grants, rare and special things. Most of the group have won individual Marden grants in the past but for Pathology to win five in one go was “pretty unprecedented”, Professor Kennedy says.

“I think it's the diversity of what we do,” says Professor Horsfield, “Marsden is looking for a broad spectrum of research. The commonalities among us would be strong human interest, because we are interested in the fundamentals of life and what goes wrong. So that links us but the approaches people take and the toolkits we use are really quite different.”

Dr Bicknell’s research involves an international cohort of 23 patients and she is unequivocal about the rewards of her chosen field.

“For me pathology is about helping people. I've got a lovely email from someone who sums it really nicely - that it starts with people and ends with people. And our research is that connection in between. It's about understanding what happens normally in development to then how that can go awry, and then using this knowledge to help people.”

Gaining this understanding is the first step in, for example, helping figure out why families have a particular genetic condition. This can then lead to investigations in how to ameliorate their condition or make their lives better through different management approaches.

“We look at the DNA and try and find those spelling mistakes. And once we find one, or hopefully more than one, that gets us excited. But then we need to start building evidence by studying cells because we've got lots of typos in our DNA that don't actually mean anything.”

“We're looking at a gene that turns out to be the most common genetic factor in Parkinson's disease called GPA. There's some well-known mutations in the gene which have been linked to Parkinson's Disease but we think the normal variation actually has an impact on the disease as well.

“We can see the time when we might screen that gene to help prevent or better treat Parkinson’s. Drugs targeting the pathway in which this gene operates are already being trialled, so the more we can learn about the gene the more likely we can ensure these drugs are targeted to the right patients at the right time.”

“How do you know it's abnormal in the first place if you haven’t done the research and compared it with normal?” says Professor Horsfield. “So research gets us to the point where we can make those identifications. It’s the driving force behind the diagnostics.”

Professor Kennedy adds: “All of these projects are about generating new knowledge. This can lead to new views on the processes that lead to disease, opening up possibilities for better detection, treatment and perhaps even prevention. While the work is done in Pathology departments, it will have much wider impacts on many disciplines: infectious disease, neurology, reproductive biology, paediatrics and oncology”.

Our DNA is like a thread that is much too long to fit into our cells, so the first step is to wind it around a spool to help compact it. This spool – a group of proteins called histones – are also used as signalling centres to control molecular switches for turning genes on and off in our cells.

We have identified for the first time a large group of patients with mutations in one of the histones. The patients have reduced brain size and intellectual disability, and several patients have autism or ADHD. Our project will explore how the mutations affect the ability of histones to compact DNA and signal to molecular switches using brain stem cells. We will also explore large autism datasets to test whether other genetic alterations in these genes could be contributing to the risk of autism in other people.

To make a brand new animal from a fertilised egg, two important processes must be integrated. These are (1) cell division for embryo growth, and (2) cell differentiation, in which cells ‘decide what to be’. In the cell division cycle, replicated chromosomes are held together by a protein complex called cohesin, which also switches on developmental genes. We plan to test the idea that cohesin’s role connects cell division and gene expression, which independently inform cell fate decision-making in the embryo. This research will provide fundamental knowledge for developmental diseases and cancers that arise from mutations in genes involving the cohesin complex.

Poor oocyte (egg) quality is a leading cause of reduced fertility in humans and animals. However, the factors underpinning oocyte quality are poorly understood. The overall aim of this research is to understand how mitochondrial structure, function and oocyte quality are interconnected, in order to identify novel ways of predicting and modifying oocyte quality. This will generate new knowledge that could lead to the development of methods for improving oocyte quality, in vitro maturation and assisted reproduction success in human and animal species.