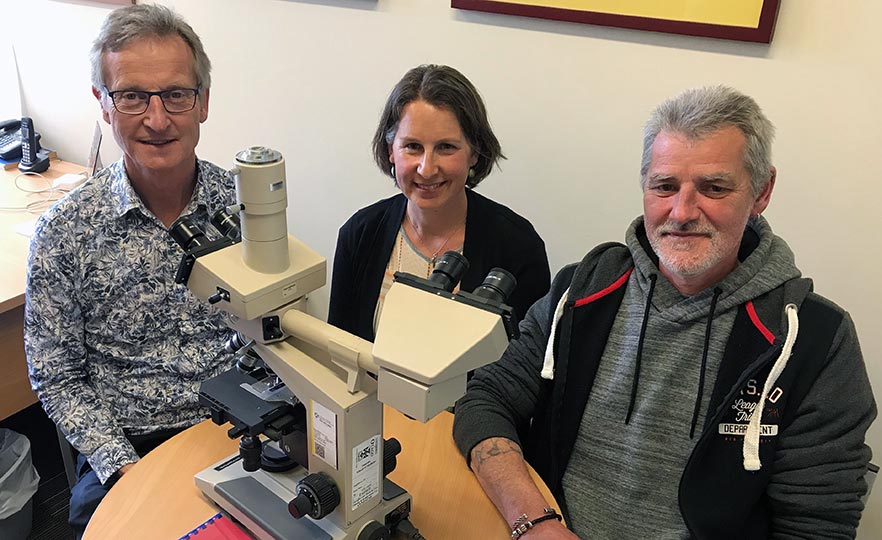 From left, Professor Ian Morison, Jackie Ludgate and Ray McCormick prepare to look at a sample of Mr McCormick’s spleen, which was removed when he was aged 2.

While the child’s initial diagnosis of having the rarest leukaemia in the world has now been confirmed as incorrect by the researchers, the new, proven diagnosis of a gene mutation is equally rare – in fact, the case is one of only 20 in the world.

That child, Ray McCormick, now aged 58 and still living in Dunedin, is the oldest documented person in the world to carry the mutation. There are no other known cases in New Zealand or Australia.

About 20 years ago, Otago University’s Professor Ian Morison, a research haematologist in the Department of Pathology, heard about Mr McCormick, a Dunedin patient diagnosed with chronic lymphocytic leukaemia in 1964, at the age of 2.

At that time, Mr McCormick was admitted to hospital with a B lymphocyte blood cell count 50 times higher than normal and he underwent surgery to remove his enlarged spleen. He then endured eight years of chemotherapy and even more weekly blood tests.

This drastic intervention was expected to be futile, with hospital clinic letters at the time describing how they were “doing their best to delay the inevitable termination”.

When told of the case 20 years ago, and after reading other published papers on Mr McCormick’s rare diagnosis, Professor Morison made it his mission to solve the medical mystery.

Together with Department of Pathology colleagues Jackie Ludgate and Rob Weeks, he has done just that, and they now know exactly what went wrong with Mr McCormick’s developing immune system.

“Ray carries a mutation in a gene called CARD11 that super-charges the growth of B lymphocytes, and the vast majority of these cells don’t actually grow up to be fully functional,” Professor Morison says.

This genetic diagnosis means Mr McCormick joins a select group of only 20 patients world-wide known to have this particular type of mutation.

“So, although the first diagnosis of chronic lymphocytic leukaemia was a misdiagnosis and the second is not really a leukaemia, he can still make the claim of having one of the rarest ‘leukaemia-like’ blood disorders in the world.

“Ray remains well, and unaffected by his rare diagnosis although his B lymphocyte level is still about 10 times higher than normal,” he says.

Professor Morison says while it is always enormously satisfying to solve a medical mystery, in this case there is the added bonus that their studies of Mr McCormick’s cells have revealed significant findings about how each B lymphocyte designs its unique antibody type and structure.

“Ray’s CARD11 mutation allows the cells to survive when similar cells from a normal person would die. His cells reveal the mistakes that naturally occur during development.

“The immune system is immensely complex, and Ray’s results have allowed us to dissect one small part of it and guide other scientists around the world as they study how our cells make antibodies.”

Mr McCormick’s condition appears to have affected his immunity as a child as he struggled to shake off coughs and colds. A long-lasting cold, which turned to pneumonia is how he ended up being hospitalised and subsequently incorrectly diagnosed when he was toddler. But apart from the side effects of the chemotherapy – some of which have had life-long impacts – Mr McCormick has always been reasonably healthy.

That continued good health has been reassuring for others around the world and was a “huge relief” for the parents of a young affected child in Kentucky some years ago, Professor Morison says.

A paper outlining the Otago team’s result has just been published in the Journal of Clinical Immunology. This is now the second medical article solely devoted to Mr McCormick who has “outlived the terribly mistaken predictions of his doctors 50 years ago”.

“Those doctors, although wrong in their initial diagnosis, did choose a wise course of action based on knowledge at the time, as revealed by the numerous letters between colleagues and experts here in New Zealand and in Canada and USA,” Professor Morison says.

“This time though, we think we’ve got it right. It clearly demonstrates the remarkable improvements in diagnostic and genetic studies that have become possible in recent times.”

Mr McCormick says while he is sad and a little angry that he underwent so many years of unnecessary treatment which inflicted the long-term side effects, he is grateful to Professor Morison.

“And I’ve told Ian that if my condition can help other people, then go ahead and use me.”

He says the initial, incorrect diagnosis has not stopped him living life.

“Sometimes, like not being able to have children gets me down a bit, it feels unfair, but really early on I just decided to live my life the way I wanted to for as long as I could. And I have.

”I got a bit sick of all the tests and so on when I was 20, so I jumped on a fishing boat and did that for a few years.”

While no-one knows exactly what the new diagnosis means for Mr McCormick as there are so few documented cases in the world, he remains positive.