Excellence in teaching, research and service 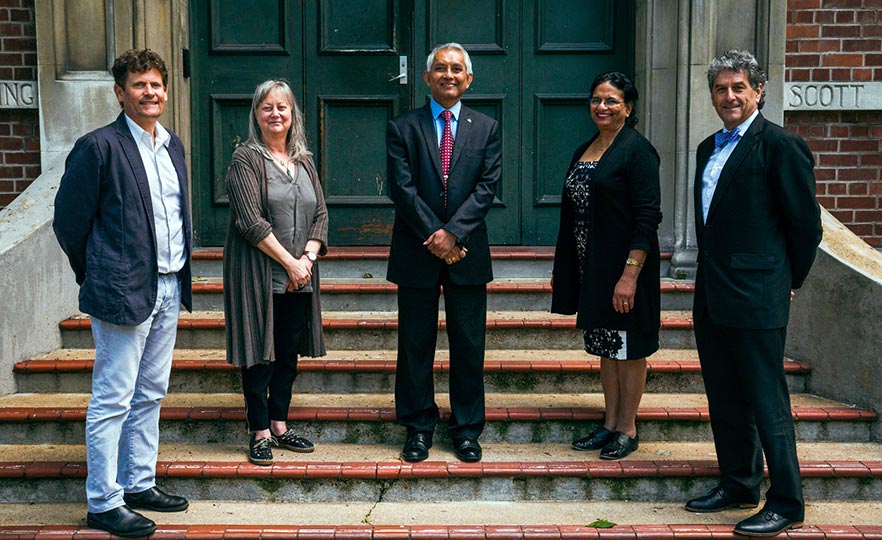 Excellence in teaching, research and service have been celebrated with the announcement of the 2021 Otago Medical School – Dunedin Campus (Dunedin School of Medicine) Teaching and Research awards.

The annual awards recognise the outstanding contributions of staff across the Dunedin School of Medicine.

“Our position in the top tier of medical schools globally is a testament to high standards and professionalism and it is important that we also recognise the vital work our skilled support staff provide behind the scenes.”

The highest honours are the Dean’s Medals, five of which have been awarded for 2021: 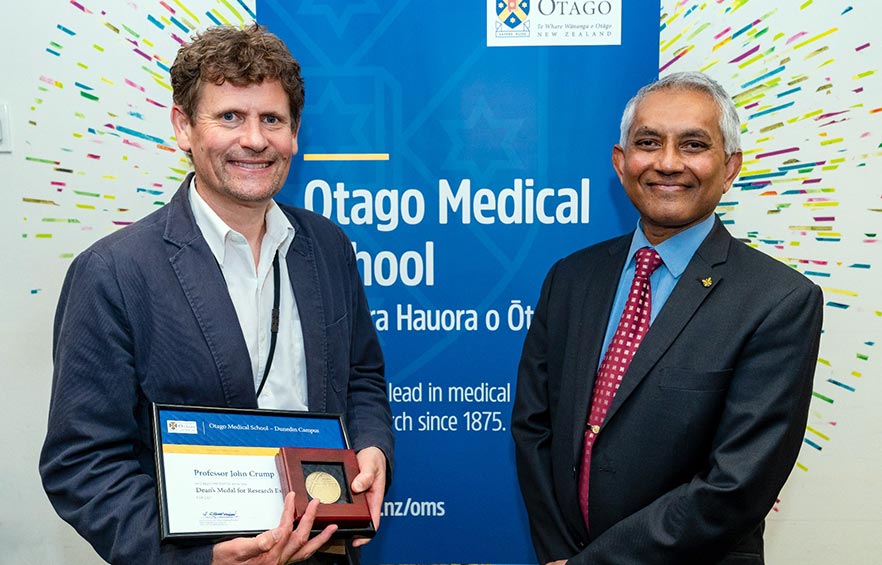 Professor Crump, Co-Director of the Centre for International Health, Department of Preventive and Social Medicine, is a prolific researcher and one of the University of Otago’s most highly cited academics. He was one of just four Otago researchers on the Clarivate Highly Cited Researchers 2020 list. A global expert on infectious diseases, Professor Crump’s work focuses on non-malaria fever in the tropics with partners in Myanmar, Tanzania, and elsewhere. He has attracted research funding from international sources, supporting more than 100 staff working in low- and middle income-countries. He has held the McKinlay Chair in Global Health since 2011. 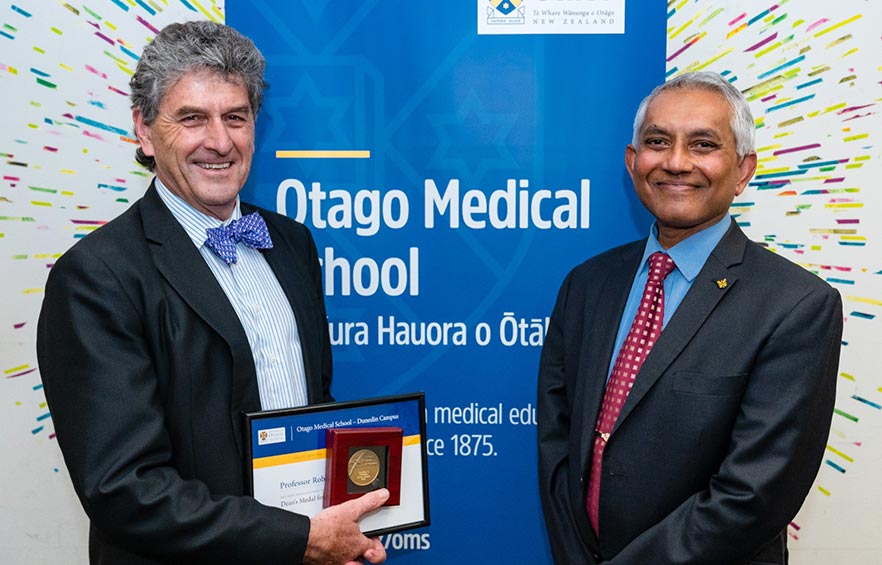 Professor Walker, of the Department on Medicine, is both an outstanding researcher and a distinguished teacher and educator. He is involved in teaching from ELM3 through to ALM6 and for the past 30 years has been the convenor of the Trainee Intern year. His teaching evaluations consistently reflect education of the highest quality. He is known for his curiosity and leading by example. This included advocating for a role for trainee interns in all hospital departments during the COVID‑19 lockdown and ensuring they were part of the active workforce in the hospital. Within his field of nephrology, Professor Walker has been closely involved in training and education across Australia and New Zealand with involvement with the Royal Australasian College of Physicians and the Australian and New Zealand Society of Nephrology. He has also had a major role in nephrology education with the Asia Pacific Society of Nephrology and the International Society of Nephrology, serving on both societies’ Continuing Medical education committees. 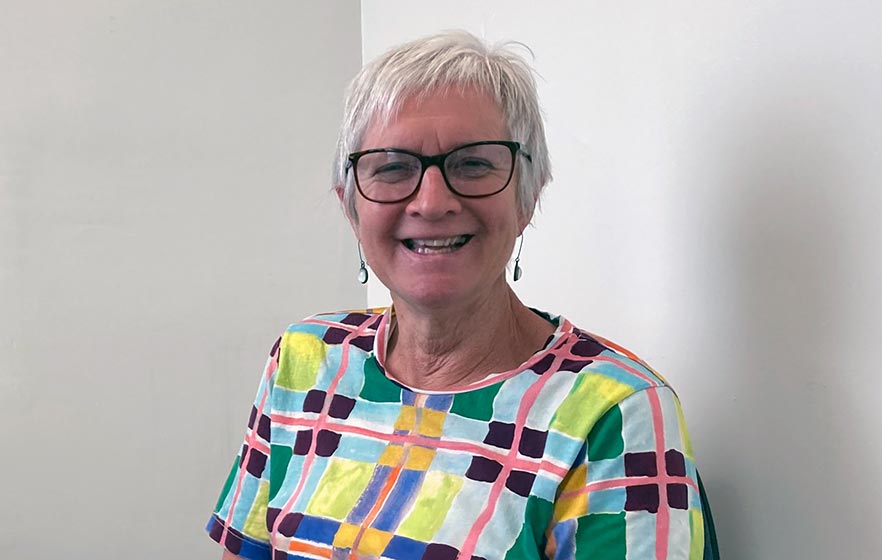 Finance Associate Lenore Armstrong has been an integral part of the Department of Medicine for almost 30 years. Originally a research nurse, Lenore retrained as the Finance Manager and is regarded as an absolutely critical member of staff, handling a complex array of tasks in a large department. She is unflappable, always smiling and known for her readiness to go above and beyond. Lenore is a long-standing member of the department’s executive committee and in 2020 joined the newly formed Research Committee for the OMS-Dunedin Campus as finance adviser. “The institutional knowledge she provides cannot be underestimated – simply put we could be lost without her,” Department of Medicine Head Professor Rachael Taylor says.

Dean’s Medal for Excellence in Service to the Dean’s Office: Jacqui Bradshaw 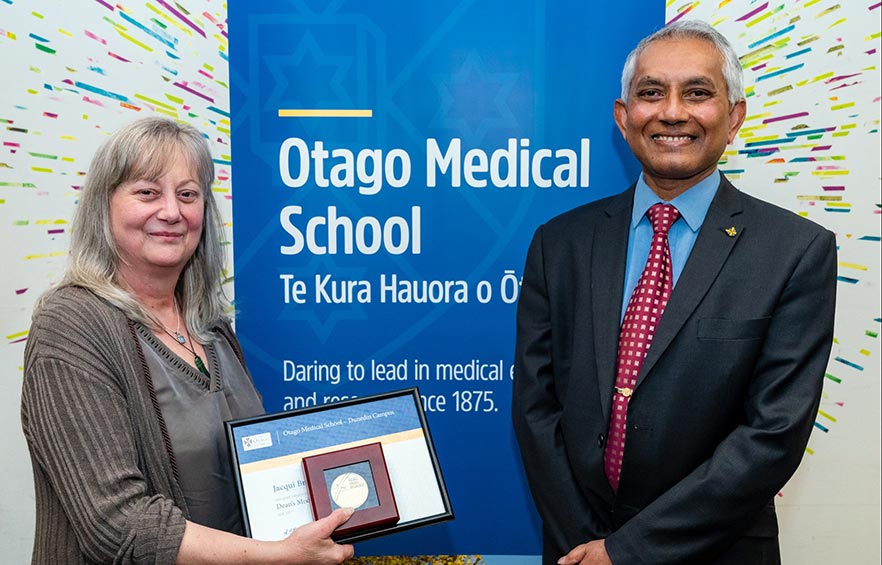 Jacqui Bradshaw, Client Services Administrator – Academic Support, is known at the anchor of the Dean’s office and OMS operations. Jacqui has immense institutional knowledge having worked supporting four Deans of OMS/DSM (Professor Don Roberton, Professor Peter Crampton, Professor Barry Taylor and Professor Rathan Subramaniam) over the past 12 years after joining what was then called the Faculty of Medicine in 2009. Known for her people skills, high level of organisation and ability to connect with students, Jacqui administers the higher degree enrolments and supports the Higher Degrees Board, OMS Academic Bard, Executive Committee and Board of Censors. She has also been instrumental in setting up the Dean’s and BMedSc(Hons) scholarships. “Jacqui is a critical presence in the running of the Otago Medical School,” OMS Dean Professor Rathan Subramaniam says. 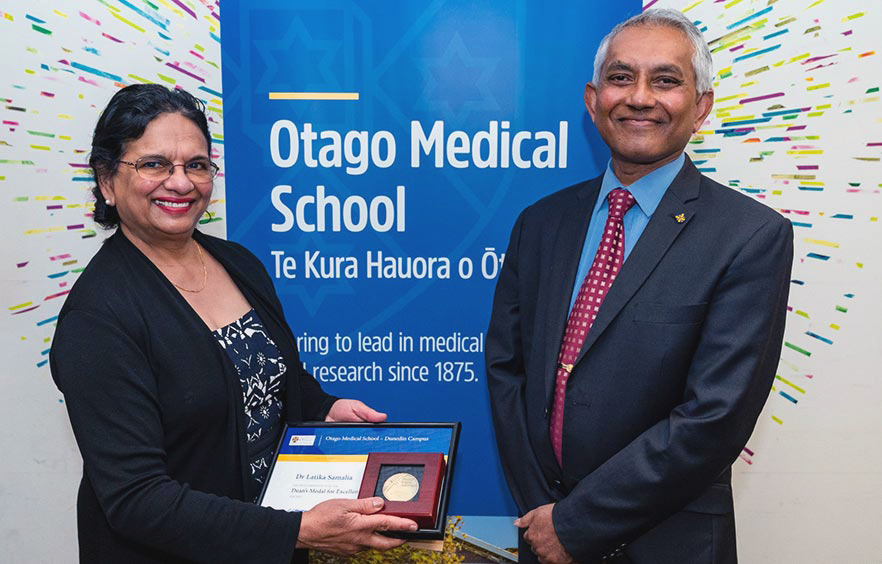 Dr Latika Samalia was named the county’s best tertiary teacher for 2021, winning the Ako Aotearoa Prime Minister’s Supreme Award. The Department of Anatomy lecturer teaches clinical skills across a range of undergraduate and postgraduate courses including the medical degree. Originally from Fiji, Dr Samalia trained as a doctor and worked as an obstetrician and gynaecologist before making the switch to teaching. She has a strong focus on Pacific students and was instrumental in developing orientation sessions for Pacific and Māori students. She says the secret to a successful classroom is creating an environment of mutual empathy, respect and kindness, but also fun; she’s famous for her humorous anecdotes which act as a reset in what can be a daunting learning environment. 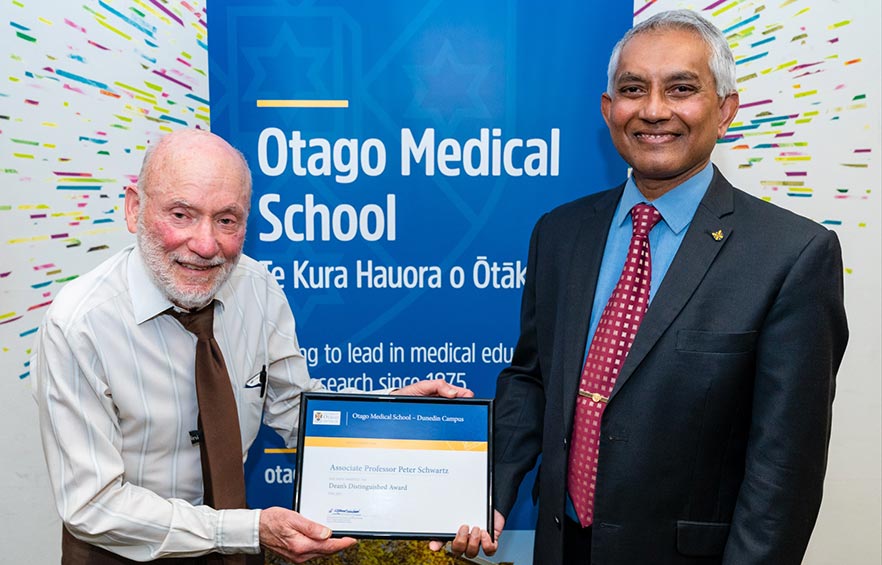 Associate Professor Peter Schwartz, of the Department of Pathology, won the Prime Minister’s Supreme Award at the National Tertiary Teaching Excellence Awards in 2003. He joined the University as a lecturer in 1971 and now teaches part-time. He is known for his innovative approach to teaching, striving for an active student-focused approach that contrasted with his own experiences as a medical student, where passive, lecture-based teaching predominated. He introduced a course which abandoned lectures in favour of small group discussion of cases and problems that demanded application of knowledge for their solution – a system which is still in use in chemical pathology and in endocrinology 35 years later. His work has been recognised by many student awards for his own teaching and for the courses he introduced, by the ANZAME/Smith, Kline and French Award for Outstanding Achievement in Medical Education in 1989, and by the award of Member of the New Zealand Order of Merit (MNZM) “for services to medical education” in the 2007 New Year Honours.

Excellence in teaching from a nursing team: Breastcare Services

Excellence in teaching from a clinical team: Emergency Department Team

Award in ALM of the MB ChB programme: Neil Pickering

Teaching in ALM of the MB ChB programme in vascular assessment: Gerry Hill

Outstanding contribution to administration of the postgrad courses: Amanda Phillips

Dean’s Office teaching award for excellence in education in ALM of the MB ChB Programme: Jo Baxter, Tui Kent, and the team from the Kōhatu Centre for Hauora Māori.