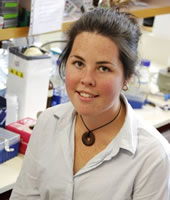 Jenny joined the department in 2003 as a student. She graduated in 2006 with a Bachelor Medical Laboratory Science awarded with distinction.

In November 2008 Jenny was awarded the prestigious Tassell Scholarship, which allowed her to undertake her PhD in Pathology.

Jenny submitted her PhD thesis in 2012 and is now employed as a teaching fellow here in the Department of Pathology.

Erin Macaulay is from Boston, USA, and came to the Department of Pathology after completing her Bachelor of Science with Honours (BSc(Hons)) at the University of Denver.

She completed her PhD in the Department in 2011. Her research, supervised by Professor Ian Morison, investigated the human placenta for placenta-specific epigenetic modifications.

Aniruddha Chatterjee is originally from Berhampore (West Bengal, India), and came to the University of Otago after completing a master's in biotechnology with distinction.

He started his research in epigenetics in November 2009 under the supervision of Professor Ian Morison here in the Department of Pathology. During this time he took the lead role to develop a robust pipeline for analysing large-scale DNA methylation data, which was of its first kind in New Zealand and lead to several appreciated publications.

Aniruddha's PhD work focused on mapping the DNA methylation events in human genome from neutrophil cells and identify inter-individual epigenetic variation, which could be important for disease susceptibility and alerted phenotypic traits.

Aniruddha completed his PhD recently and will continue to work on documenting the consequences of epigenetic variation in humans and he will also be involved in investigating the epigenetic origin of progression of melanoma disease with Professor Mike Eccles.