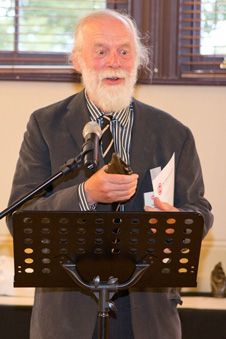 An Otago academic was one of five people to be recognised by the New Zealand AIDS Foundation (NZAF) during the weekend, receiving honorary Life Membership – the highest honour the organisation bestows.

Associate Professor Nigel Dickson, one of the most significant figures in the University’s AIDS Epidemiology Group, received the award at a ceremony at Auckland’s St Columba Centre on Saturday evening.

He says he is humbled to receive this accolade – which he says shows the work of the AIDS Epidemiology Group has been of value to the community most affected by the epidemic of HIV.

“I always found infectious disease epidemiology of particular I interest,” he says. “But what has made working on the area of HIV/AIDS so stimulating has been how there are so many social and cultural dimensions to the problem.

“One thing that has always been a feature of New Zealand’s response to the epidemic has been the involvement of the affected community. The NZAF has taken a lead in promoting prevention among the gay and bisexual community. There has also been a strong organised presence from sex workers and people who inject drugs, which I am sure has resulted in the lower incidence among these groups.”

"... what has made working on the area of HIV/AIDS so stimulating has been how there are so many social and cultural dimensions to the problem."

However, Associate Professor Dickson says that worryingly, cases of HIV among gay, bisexual and other men who have sex with men in New Zealand are currently on the rise.

“While the government was very proactive in its response to the problem of HIV/AIDS in the late 1980s, we are not now seeing a concerted response to the current situation.”

Associate Professor Dickson says the Ministry of Health committee that advised on matters related to HIV/AIDS was disbanded several years ago, and since that time it has been harder to see progress nationally on important issues.

Life Memberships are awarded by the NZAF board as recognition of an outstanding contribution by individuals who have positively enhanced and substantially contributed to their mission over a significant period of time.

About the AIDS Epidemiology Group

The AIDS Epidemiology Group, based at the Department of Preventive and Social Medicine, is funded by the Ministry of Health to undertaken epidemiologic surveillance of AIDS and HIV infection in New Zealand.

The Group was established by Professors David Skegg and Charlotte Paul in 1989. Associate Professor Dickson has been involved since the end of 1990, first as Senior Research Fellow and subsequently as Director until he retired from that position in June this year.