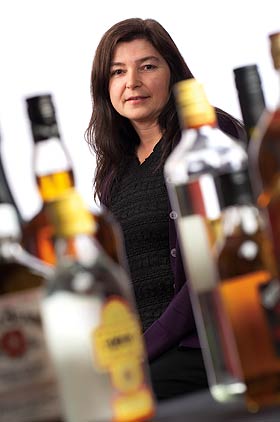 Professor Jennie Connor:
"New Zealanders are far too tolerant of the risks created by heavy drinking."

New Zealanders are living in a kind of fantasy, believes Preventive and Social Medicine Professor Jennie Connor. To her mind, we’re in a state of denial about just how harmful our national drinking habits really are.

Low-risk drinking has been defined as fewer than 14 standard drinks per week, with no more than four drinks at any one time, but this is not as common as people think. Half of 18–24 year olds and around 25 per cent of all drinkers drink heavily on a typical drinking occasion. And when we say low-risk drinking, Connor points out, we are talking about drinking at levels where the risk of dying from alcohol-related injury or disease is less than one per cent, “so that’s the same risk as smoking five cigarettes a day”.

The national pattern of drinking, and its attendant costs for health, families and crime, means the regulation of alcohol has been a political issue in New Zealand ever since the efforts of the temperance movement in the 19th century. And with a long-standing research interest in alcohol-related harm, Connor was in a position of contributing to public debate as the government tackled its latest round of alcohol law reform.

We had an idea that we would become more sophisticated in our drinking habits in a more liberal environment. All that happened is more people – and younger people – drank more.

Her research has examined the “burden heavy drinking places on a population”. The numbers are not trivial. Her findings include that more than 1,000 deaths per year are directly attributable to alcohol in New Zealand, resulting in 17,000 years of potential life lost every year due to shortened lives.

Further, in the face of arguments that individuals’ drinking choices are no one’s business but their own, Connor’s research amasses evidence that, as often as not, the harm caused by heavy drinking is borne by others. A third of violent offences, including family violence, and 44 per cent of homicides involve someone who has been drinking, as do 62,000 physical and 10,000 sexual assaults per year. Some 10,500 of these incidents require medical treatment and 17,000 involve the police. Heavy drinking also makes you more likely to be a victim of violence.

“This is what we have normalised in our society,” says Connor. “New Zealanders are far too tolerant of the risks created by heavy drinking.” As well as bringing her own research to bear on the New Zealand Law Commission report that advised government policy, Connor says her role also became a translational one, highlighting relevant New Zealand and international research. This included drawing attention to the kinds of policies that we know, internationally, to reduce harm from alcohol. And the most effective of these, she argues, is increasing the price. This may be achieved through excise tax or minimum legal prices, “so a unit of alcohol would need to be at least two dollars, for example”. But, she says, the political appetite for this is disappointingly low.

Indeed, of the more than 200 recommendations made by the Law Commission, the most effective strategies – in areas including regulating price, access to licensed premises and drink-driving limits – have been rejected by the policy-makers. For Connor, this feels like more than a lost opportunity. It is a denial of the reality of both New Zealand’s present and its history.

“We imported our national drinking pattern from Northern Europe and no country has ever completely overturned its drinking culture. What we can do is calibrate it up or down through regulation. Over the past couple of decades we have really taken the brakes off – and most people now agree that hasn’t worked. We had an idea that we would become more sophisticated in our drinking habits in a more liberal environment. All that happened is more people – and younger people – drank more.”

In this context, says Connor, “I don’t think alcohol should be so cheap as to make it a casual purchase. It’s a carcinogen, an intoxicant, an addictive drug. For anyone with a reasonable job, it’s currently just part of the grocery bill – but we should have to think twice about how much we buy.”

Low-risk drinkers have little to fear – and much to gain – from price rises and greater regulation, she says.

“Young people would drink less, heavy drinkers would drink less and low-risk drinkers would pay a little more. But think what you get for your money – a reduction in the prison population, a slimmed-down judicial system, the medical system transformed. At the moment, New Zealand as a community commits astonishing amounts of the public’s resources to support its drinking culture. If you are not one of the people who drink excessively and frequently and cause problems, why would you want your public money spent in this way?”

Further, she argues, “the government said that the changes they were implementing were focused on addressing heavy drinking, without inconveniencing low and moderate drinkers. But, frankly, if you’re worried about the blood-alcohol limits, you’re not a low-risk drinker. If you’re still out drinking at 4am, you’re not a light-to-moderate drinker.”