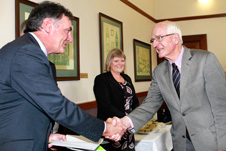 The University of Otago is the grateful recipient of $3m from the high-profile community campaign to allow the University to keep neurosurgery in Dunedin.

The funds were formally handed over from fund-raising campaign chairman (of the Neurological Foundation) Dr Brian McMahon to Otago's Chancellor John Ward at a small gathering at the Clocktower yesterday.

"The University is extraordinarily grateful for the support that has been given to the University, from all over the Otago and Southland area," Mr Ward said.

Dr McMahon added later that he was relieved the campaign had worked so well, and handing over the funds came with a great sense of achievement.

"We thought at the outset this would take 18 months to two years, but this has been achieved in just over 10 months."

He said the amount raised and the community backing of the campaign showed that Dunedin held its medical school and hospital in very high regard.

"I can’t think of anywhere else where we have such a fine array of medical facilities. We are very fortunate here," Dr McMahon said.

The money is earmarked for the Dunedin School of Medicine's neurosurgery unit, headed by its new Chair, Belgian neurosurgeon Professor Dirk De Ridder, who arrived in Dunedin in February. He and English neurosurgeon Reuben Johnson join neurosurgeon Ahmad Taha to form the team that will provide research and clinical services in the South.

The service had been under threat of centralisation in Christchurch.

The neurosurgery unit is part of the Dunedin School of Medicine's Department of Surgical Sciences.

The Otago Bulletin Board first published this story on 11 June 2013.