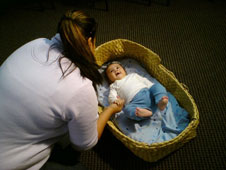 Infants sleeping in wahakura (flax bassinets) are relatively safe when compared with bassinets, a joint study between the University of Otago and Otago Polytechnic has found.

The researchers, led by Professor Barry Taylor and Dr David Tipene-Leach of the University of Otago, and Associate Professor Sally Baddock of Otago Polytechnic, concluded there were no significant differences in risk behaviours in wahakura compared to bassinets and there were other advantages, including an increase in sustained breastfeeding.

The paper was recently published in leading scientific journal Pediatrics.

The study finds evidence that wahakura are relatively safe and can be promoted as an alternative to infant-adult bed-sharing, say the researchers.

“The study was motivated by the concern that Māori and other indigenous populations have greater rates of sudden unexpected death in infancy (SUDI). This is likely due to the high prevalence of bed-sharing where there has been smoking in pregnancy – a combination that is a major contributor to risk,” Professor Taylor, who is also Head of the Dunedin School of Medicine, says.

Both bed-sharing and smoking have proved difficult to change and thus the wahakura (flax bassinet) was developed as a culturally appropriate alternative to direct bed-sharing.

Dr David Tipene-Leach says: “The wahakura is promoted to provide a separate and safer sleep space for baby that can be used in the shared bed and therefore that allows the valued close proximity for mother and baby.”

While wahakura are used by many, to date there has been no direct evidence about their safety.

Researchers recruited 200 predominantly Māori pregnant women from deprived areas of New Zealand as measured by the NZ Deprivation Index. They provided the women with either a wahakura or bassinet during pregnancy and then later compared the risks and benefits of infants sleeping in either device. They investigated breastfeeding, infant sleep position, the amount of infant head covering during sleep, the amount of bed-sharing (without the device), and maternal sleep and fatigue.

Associate Professor Baddock says mothers were asked to sleep babies in either a bassinet or wahakura from birth. At one, three and six months mothers completed questionnaires about babies’ sleep and at one month infra-red video was used to record the baby’s overnight sleep.

When the groups were compared according to allocated device there were no differences at one, three and six months in infant-adult direct bed-sharing, but at the six-month interview the wahakura group reported twice the level of full breastfeeding (22.5% vs 10.7%, p=0.04).

Maternal sleep and fatigue were not significantly different between groups. The researchers concluded there were no significant differences in infant risk behaviours in wahakura compared to bassinets and there were other advantages, including an increase in sustained breastfeeding. This suggests wahakura are relatively safe and can be promoted as an alternative to infant-adult bed-sharing. Policies that encourage utilisation are therefore likely to be helpful in high risk populations.

“These findings will give comfort to health workers who will be able to confidently promote a device that encourages a form of bed-sharing that increases safety for infants,” Dr Tipene-Leach says

The Ministry of Health is currently developing a national Safe Sleep programme and this study provides much needed evidence about the wahakura.

The study was funded by a grant from the Health Research Council of New Zealand and a University of Otago Research Grant.