*Article below as appears in NZDoctor.co.nz written by Cliff Taylor 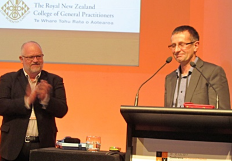 A standing ovation and thunderous applause greeted the announcement at the weekend’s RNZCGP conference in Dunedin that rural health specialist Garry Nixon had been awarded the coveted Eric Elder Memorial Medal. Dr Nixon was clearly moved to receive the award from college president Tim Malloy, who praised him for his insights into rural generalism and his commitment to improving health outcomes for rural communities.

In accepting the award, the Dunstan Hospital medical officer and lecturer in rural health at the Dunedin School of Medicine then revealed he had done his fifth-year medical attachment with the legendary Tuatapere GP Dr Elder in the 1980s, “and I was possibly one of the last medical students to ever do so”.

Growing up in Southland, he had heard of Dr Elder, who spent 60 years working in the remote rural community. The young Garry Nixon decided it would be the best place to learn his craft. One of his memories was of living in a rough farm cottage inhabited by a possum which drank beer from a glass and ran around the curtains.

Dr Elder himself was slightly aloof, but “an astounding clinician”. He treated a lot of chainsaw injuries from the surrounding forestry sector, stitching up massive wounds in men’s thighs.

“He would sit there for hours with 60 nylon and just do this absolutely immaculate job,” says Dr Nixon. “I’ve never seen anything like it.”

He says the older GP was interested in the latest medical developments but also had a “serious degree of scepticism” about anything new.

The stuff of legend

But it was the stories which his patients told about their long-serving GP which have stayed in Dr Nixon’s mind.

“Every one of them had a story about him going into their house some time during the night and looking in on someone who was unwell, usually without disturbing the rest of the household. Of course, none of the homes were locked at that time.

“He was a notoriously bad driver and everyone in the community was scared of his driving. Another patient told me, once coming back from Invercargill, he crashed his car in the ditch outside their property, which was their greatest fear because he turned up at the house and said he’d need to borrow their car.

“Rather than risk it, they chauffeured him around all his work for the next few days.”

Dr Nixon says he was starting to get into mountain climbing at the time and Dr Elder gifted him a book by Heinrich Harrer about ascending the North Face of the Eiger, “which was clearly designed to make me take up some sort of other recreational activity.”

He says he still has incredibly strong memories of Eric Elder and is very honoured to receive the award.

“I certainly went away from that rotation realising that as far as Eric Elder was concerned the greatest privilege in life was serving the people he lived with.”

Dr Nixon gave a keynote address at the conference on Saturday outlining the journey towards rural generalism in New Zealand, of which he has been a key part. He says the specialty has come a long way and everyone involved can be proud of the achievements, but it is important to continue making progress and ensure there is flexibility so people can move easily around the whole “spectrum” of rural generalism.

“The stakes are higher now,” he says. “Doctors have invested the careers in this; we have to invest in it and look after it.”