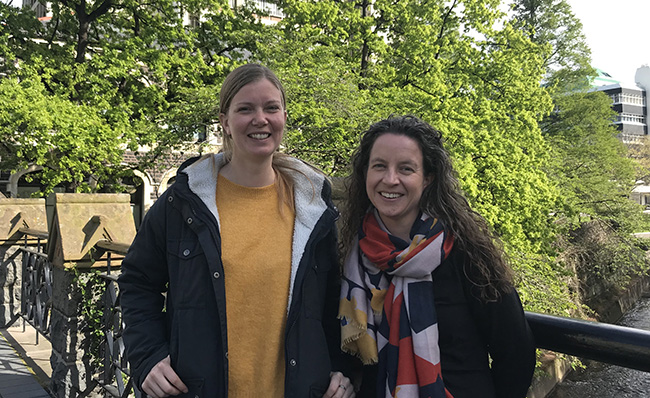 A University of Otago researcher has won a fellowship to undertake cutting-edge research on stomach cancer survival, using technology not yet available in New Zealand.

Department of Medicine Senior Lecturer and medical oncologist Dr Sharon Pattison has been awarded the Roche NZ Translational Cancer Research Fellowship to further her work on interactions between cancer cells and the immune system.

The annual Roche award, worth $30,000, means a member of Dr Pattison’s small research team can travel to the Walter and Eliza Hall Institute (WEHI) in Melbourne where they have been given access to lattice light sheet microscopy, a novel way of imaging live cells over an extended period of time.

Dr Pattison has been studying how a protein complex called the immunoproteasome, which is present in both normal and cancer cells, can influence survival from cancer.

One of the recognised functions of the immunoproteasome is to alter the range of antigens presented on the surface of cancer cells and affect the ensuing anti-cancer immune response.

“There is much that we do not know about the function of the immunoproteasome, and in the context of cancer how it might contribute to progression and survival,” she says.

“Many of the techniques that we use in the laboratory routinely allow us only to look at cells at a particular point in time, and with insufficient resolution to fully understand how cells interact and what goes on inside a cell.”

The lattice light sheet microscopy used at WEHI will allow her team to watch dynamic interactions between cells and ultimately better understand the function of the immunoproteasome.

The research may identify new strategies used by cancer cells to escape destruction by the immune system, and potentially identify new targets for cancer therapies, she says.

Dr Pattison’s research so far has uncovered an observation that expression of part of the immunoproteasome complex is associated with survival in stomach cancer patients, but can either improve or lessen survival outcomes in different types of stomach cancer.

“A better understanding of how this complex changes the interaction between cancer cells and immune cells, and any treatment targets identified through this research, may therefore also have impact on other cancer types and potentially autoimmune and neurological diseases,” she says.

As part of her PhD, Dr Pattison worked with stomach cancer patients, which reinforced her desire to undertake further research on stomach cancer survival.

She says she is very excited to receive the Roche Fellowship.

“We’d like to thank Roche for awarding us this Fellowship, Niall Geoghegan and Kelly Rogers from the Centre for Dynamic Imaging at WEHI to agreeing to a collaboration with no funding initially.

“Although we are a small research team, we have a lot of support from others within the Departments of Pathology and Medicine at the University of Otago and would like to thank the members of these departments for their feedback, support and assistance.”

The award was announced this evening at the New Zealand Society for Oncology’s annual conference in Wellington.

“Sharon has a novel and ambitious research idea and, as a medical oncologist with a PhD in fundamental science, she is well placed to lead this project. One of our judges described the work as ‘compelling’ and ‘will lead to new techniques in New Zealand’.”

Sharon studied at University of Otago and University of Melbourne and was appointed as a Senior Lecturer, Department of Medicine, and also as Medical Oncologist, Southern District Health Board in 2016. Sharon has research interests in gastric cancer, colorectal cancer, and neuroendocrine tumours, with a particular interest in understanding the variability that is seen at a clinical, histological, and genomic level.

The Roche award, which has an annual value of $30,000, provides a unique opportunity for NZ cancer research teams to up-skill an integral team member, so that the team can work together more effectively and improve research output.

F. Hoffmann-La Roche & Co. was founded in 1896 in Basel, Switzerland and is the parent company of Roche Products (NZ) Ltd (Roche), which started operating in New Zealand in 1973. The current Roche team of 30 dedicated employees has the primary goal of facilitating New Zealanders’ access to innovative medicines. As a leading developer of cancer medicines, Roche is proud of its collaboration with NZSO.