Discover the latest news, awards, prizes and events within the Department of Economics at Otago.

The Department’s Andrew Coleman has started writing a very interesting blog for TVHE – The Visible Hand in Economics. His first three posts are:
• Why devotees of Greta need to give her up to save the planet
• Cook, Elcano, and circumnavigation
• Taxing capital incomes – are we doing it the right way?

Keep an eye open for more from Andrew, available at www.tvhe.co.nz/author/andrew-coleman. 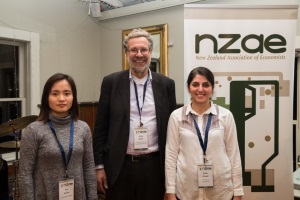 Congratulations to our PhD student Anh Nguyen, who received one of two Graduate Study Awards at the 2017 NZAE conference! The awards are made by the NZAE Education Trust and are based on the paper presented as well as the student's academic record. Well done, Anh (seen in the picture on the left)!

The World Health Organization (WHO) used 1000Minds decision-making software – co-invented by Paul Hansen of the Department of Economics – to create a prioritised list of 12 bacteria posing the greatest threats to human health because they are resistant to antibiotics. Millions of people could die if new and effective antibiotics are not developed. Released in 2017, the Priority Pathogens List is to help prioritise R&D into new antibiotics. 1000Minds was used to survey and aggregate the preferences of experts in infectious diseases from around the world. To see the prioritised list of diseases and for more information about the WHO project, click here.

Read the latest Discussion Papers for the Department of Economics.