Welcome to the Textbase of Early Tudor English Website 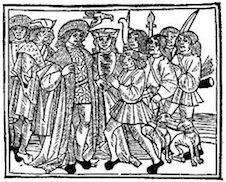 Based in the Department of English at the University of Otago, New Zealand, this project aims at the creation and publication of an encoded electronic text base of early Tudor English literature (1485-1550). At present the primary focus of the project is upon verse texts.

The formation of the verse database (some 260,000 lines) is substantially completed. Of the total number of works or poems in the verse corpus (currently estimated at around 950), all but a handful have undergone editing and structural mark-up. This involves the tagging of texts with XML flags conformant with the guidelines set out by the Text Encoding Initiative (TEI), an international and interdisciplinary encoding standard that helps libraries, museums, publishers, and individual scholars represent all kinds of literary and linguistic texts for online research.

This Web page enables interested readers to search the collection, or to display and read texts. The texts available are listed in the reference database. They consist for the most part of early imprints of verse works composed between 1485 and 1550, imprints of some earlier works, such as fifteenth century verse romances, released in print form after 1500, and the complete works of selected poets (both manuscript and print witnesses), including John Skelton, Alexander Barclay, and Stephen Hawes, Henry Howard and Luke Shepherd. Works by Wyatt and some other well-known poets are included so far as they have been edited, but some poems in manuscript copies await inclusion.

Future plans include a Rhyme Index, and an Index of Early Tudor Spellings. The latter will link to related software that assigns a Tudor spelling form to its modern 'Headword' form or, in reverse, provide a list of potential Tudor spellings in response to the input of a modern spelling form. This tool will obviate the need to specify several strings when searching for a particular word. In the corpus of Skelton's poetry, for example, parts of the verb 'shall' may appear as shall, shal, shalt, shalte, shold, sholde, should, shoulde, shuld, shulde, xall, xalte, xuld, xuldyst, xulddst.

Enhancement of the Textbase eventually will include other features such as scanned images of the illustrations in source materials.