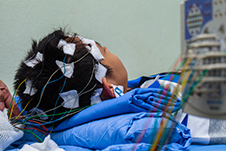 Epilepsy is the most common serious brain disorder worldwide, characterised by seizures that can occur at any age.

In fact, 1 in 20 people will have a seizure at some stage in their lives. There are approximately 0.5-1% of New Zealanders living with epilepsy.

A seizure is the sudden and transient occurrence of signs and/or symptoms that result from an abnormal electrical disturbance in the brain.

The clinical manifestations exhibited during the seizure depend on the part of the brain that is involved in the abnormal neuronal activity.

Epilepsy is a group of disorders organised into syndromes defined by age of onset, type of seizures, EEG features and comorbidities.

Until relatively recently we did not know what caused most people's epilepsy, but we now know that genetic abnormalities are the cause of the majority of epilepsy.

Unfortunately, to date only a small percentage of the genes responsible for epilepsy have been identified. These genes encode many different ion channel subunits and brain-expressed proteins.