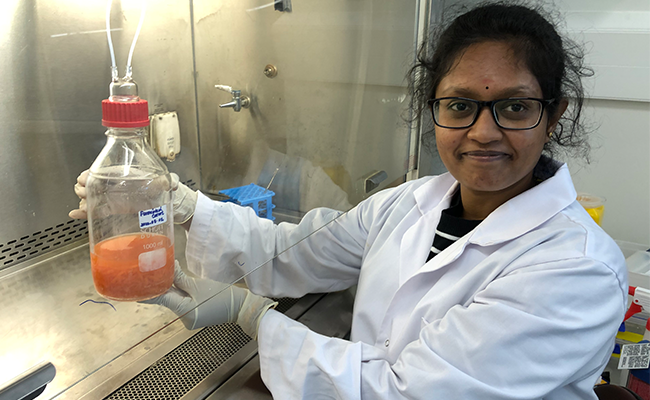 Ugly vegetables otherwise destined for landfill are being repurposed by one University of Otago PhD candidate to create meat and dairy-like flavour compounds.

Sarathadevi Rajendran is in the second year of her PhD in the Food Science Department supervised by Professor Phil Bremer and Associate Professor Patrick Silcock.

Over time, these products have been improved in terms of their texture and appearance to more closely resemble meat or dairy products but developing a satisfying meat or dairy substitute flavour had proved to be far trickier.

“This is an ongoing challenge. So, I thought, getting the meat and dairy-like flavours from plant-based substrates will satisfy consumers who are moving towards plant-based food.”

In order for the product to remain completely plant-based, she could not use dairy or meat products to recreate the flavour compounds, either. In the past, food producers have tried using vegetables, fruits and grains to create these sorts of flavours.

Rajendran, however, was also aware that waste management within cities was a problem, especially food waste.

“Growers are discarding vegetables, saying they are ugly vegetables which look different.”

Despite their appearances, these vegetables are otherwise still nutritiously sound, and it was for this reason she opted to work with them. 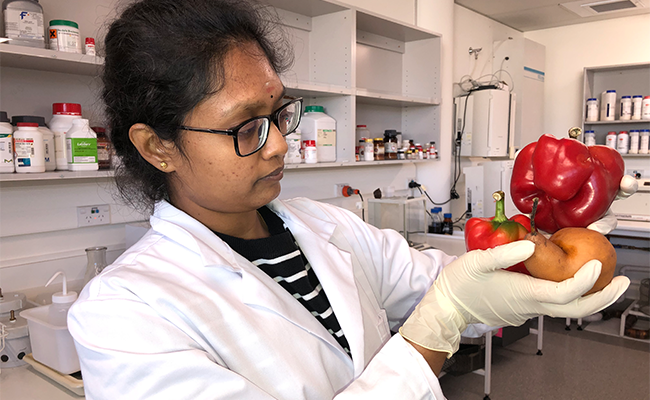 “I'm using the beneficial bacteria, lactic acid bacteria, to ferment the ugly vegetables in order to get the desired flavour compounds.”

She hopes to produce a series of flavour concentrates which can be added to plant based foods, including existing products, to give them the desired meat or dairy flavour.

She is still a little way off from producing flavour compounds that would convince people.

“I am still developing the compounds; it will take a lot of work.”

Rajendran says demand for plant-based food is increasing as a result of many consumers choosing to reduce their meat and dairy consumption because of these foods negative impact on the environment.

Further, there is a growing trend worldwide where people were concerned for the welfare of animals prior to slaughter. Plant based food production also reduces greenhouse emissions by 10 percent, she says

Plant-based milk made a good substitute for people with lactose intolerance, while plant-based foods were high in protein and fibre.

Rajendran says researchers have found plant-based diets enabled people to better manage their weight, and also reduce some uncommunicable diseases such as heart disease, diabetes and numerous types of cancer.