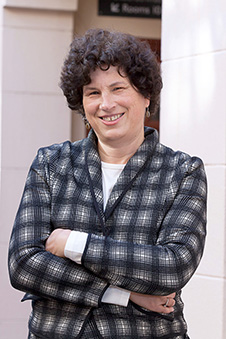 Co-author Professor Sheila Skeaff, from the Department of Human Nutrition.

A new study by a team of University of Otago researchers from the Departments of Food Science and Human Nutrition has found about 77 per cent of food waste produced by food retailers is diverted to other destinations.

Approximately 46 per cent of the food saved from landfill is turned into animal feed and 15 per cent is donated to food rescue charities.

Globally, about one third of all food production is wasted, according to the Food and Agriculture Organisation of the United Nations.

New Zealand is one of 193 nations to ratify the United Nations Sustainable Development Goals (SDG), which includes the aim to reduce food waste by 50 per cent by 2030.

The new Otago study is the first to quantify retail food waste in New Zealand, and identify motivators and barriers to reducing it.

Co-author Professor Sheila Skeaff, from the Department of Human Nutrition, says consumers need to stop blaming supermarkets for food waste and realise most food waste happens in the home.

“Reducing food waste is one of the most practical things people can do to help reduce the impacts of climate change,” she says.

Data for the study was collected from 16 supermarkets in Auckland, Wellington, Christchurch and Dunedin, from all three of New Zealand’s major retail chains: Countdown, New World and Pak ‘n Save.

Full waste audit results obtained from 11 of those stores found that of all food waste – including food diverted to animal feed and food donation – fresh vegetables made up 27 per cent of food waste and diverted product, followed by bakery at 23 per cent, meat and fish at 19 per cent, fruit at 17 per cent and dairy at six per cent.

Of the food waste specifically sent to landfill, the biggest contributors were dairy at 23 per cent, meat and fish at 21 per cent and bakery at 21 per cent.

Interviews with staff from all 16 stores produced some surprising results.

Many interviewees were highly motivated to reduce food waste in their supermarkets due to environmental concerns, and felt it was their responsibility to set a good example to their organisations and wider communities.

Professor Skeaff says this is surprising because similar overseas studies have shown supermarket staff are more focused on the cost savings of wasting less food.

One retailer commented: “I too am a citizen of this planet. I care, my team do care, we actually take a lot of pride in how much we divert… we literally donate tonnes of food to the community.”

However, interviewees also identified the biggest barrier to reducing food waste was the challenge of obtaining buy-in from staff to manage waste responsibility.

Retailers said that without sufficient training and education, staff lacked clarity and purpose for why they were required to carry out waste minimisation purposes.

Another major barrier was concern about food safety, with retailers preferring a cautious approach when diverting food waste to animal feed or charities.

Professor Skeaff says policies that enable food donation, whether to food rescue or for other uses, are crucial in ensuring food waste is not sent to landfill.

“Food date labelling is a key cause of food waste and policymakers should consider simplifying the type of date labels used.”

However, reducing food waste cannot be done by one part of the supply chain alone, she says.

“We need a co-ordinated effort if we are going to reach the SDG goal to halve global food waste by 2030”.

“Policymakers need to set the strategy and short-term targets to get us there and hold the sector to account by monitoring progress towards achieving the target.”

Professor Skeaff and her study co-authors, Francesca Goodman-Smith and Miranda Mirosa, recommend supermarkets further reduce food waste by educating consumers, better forecasting practices, repurposing as much food as possible in-store and continuing to partner with businesses and charities who can re-purpose food waste.

They say consumers need to start taking responsibility by buying fresh food in small quantities more than once a week so it doesn’t go bad, eating leftovers, storing food correctly and using best-before dates as a measure of quality, not safety.