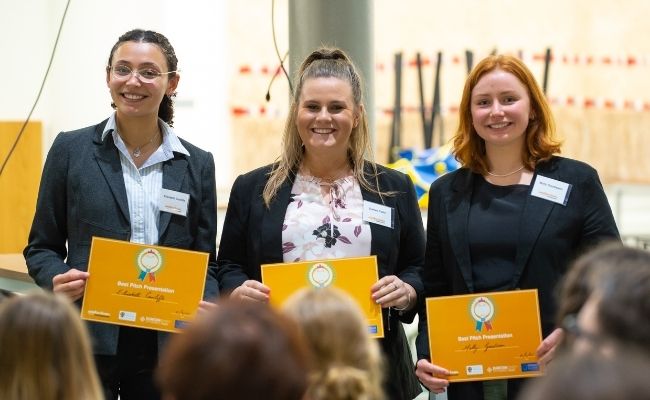 Oddly shaped fruit and vegetables contribute to a third of New Zealand’s annual billion-dollar food waste problem. Three Food Science students recently came up with an idea which could have a positive impact on food-waste reduction.

Re-shined Roots is a student-led business and recently won Best Pitch at the Start-Up Dunedin Audacious pitches. Its founders hope to take unlovable carrots and turn them into a much-loved snack instead.

Elizabeth Cunliffe, Molly Goodisson and Sydney Collin took part in the most recent Audacious Programme. Elizabeth says for the past few weeks they had learnt more about how to turn their passion into an action plan.

“During the programme we learned more about the entrepreneurial world, how to identify your consumer and finances among other things. Audacious is a programme any student can sign up for and for us it worked as we already had an idea.”

Sydney says the project has contributed both to their studies and their business ideas.

“The 311 paper usually requires students to work with a business on a concept but we were given the chance to do Audacious and develop our own product idea. Currently we are still prototyping, but our snack idea is a cracker which uses carrots as a main ingredient.”

The vegetables are often disposed of through the export process rather than at consumer level which the team say is disappointing considering how many kiwis struggle to afford fresh fruit and vegetables.

“Carrots have so many nutrients such as vitamin A and fibre and while the snack market is somewhat saturated, sustainable, healthy snacks aren’t as easy to find.”

“The carrots we are using are deemed unsuitable for export but there’s actually nothing wrong with them; they’re just oddly shaped. Fresh produce like this is often disposed of throughout the supply chain.”

A study conducted at Otago a few years ago concluded kids actually prefer the unusual vegetables, in-fact the humorous aspect of odd produce encouraged children to eat them.

With the prize money from their Audacious pitch the team plan to continue their venture in creating the perfect, locally made snack, Molly says.

“We are continuing this project for the rest of the year and going through the development steps such as product testing and shelf-life testing. We’ve also pitched to a few people for business support and had a few opportunities arise from it.”

Re-shined Roots plan to have their product available in the near future.