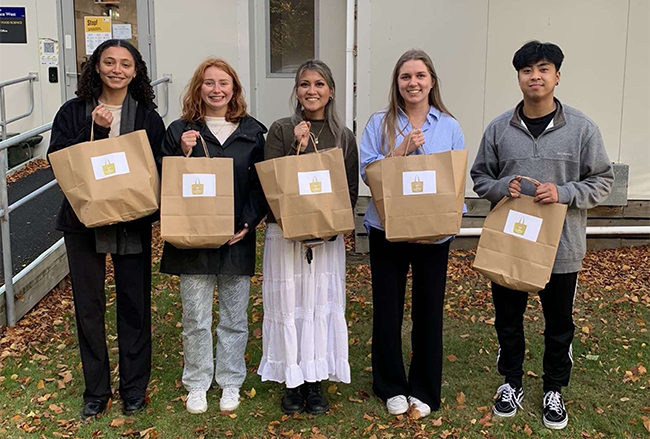 The Food Science students organising the event are, from left, Lizzie Cunliffe, Molly Goodisson, Shain Ebron, Emily Doughty and Lance Aya. The sixth member of the group, Emma Roberts, was not available for the photo. Photo: supplied.

Dunedin ‘foodie’ influencers will be getting creative in the kitchen with some of Aotearoa New Zealand’s most commonly wasted ingredients and sharing the results on Instagram.

The challenge has been cooked up by the Food Science Department for its annual Stop Wasting Food Day.

Traditionally students host the event in The Link and people passing by are invited to take part. The event had gone ahead in previous years but this year, as a result of COVID-19 restrictions, the group organising it had to come up with something different.

“We had to think up a completely new event that we had never done before, and we came up with the food boxes,” Consumer Food Science honours student Lance Aya says.

The boxes contain some of New Zealand’s most commonly wasted cooking ingredients such as potatoes and carrots, as well as a couple of recipes, he says. The group decided to collaborate with six popular Dunedin Instagram influencers who all share a passion for food.

“We’ll be sending them each a food box on the two nights leading up to Stop Wasting Food Day, Thursday 28 April.”

There will be enough ingredients provided to make two meals, one snack and a desert, as well as an informational pamphlet on food waste and how to reduce it.

The influencers will document and share the whole process, from receiving the box, to preparing and eating the meals, along with some tips to help their followers stop wasting food, Lance says. 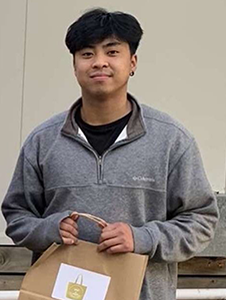 Stop Wasting Food Day is part of the Love Food Hate Waste movement which seeks to reduce the amount of food people throw out needlessly. Nationally, Aotearoa New Zealand throws away 157,389 tonnes of food per year, which is enough to feed 337,774 people for a year, or nearly triple the population of Dunedin.

Lance believes many people do not know how to store food properly, which leads to it perishing and being binned.

“There’s a lot of factors, such as people not realising storing fruit near apples ripens the fruit a lot quicker,” he says.

“Keeping things out of light, and in cool, dark places will help them last longer. Also storing them in the fridge, near the back, where it’s colder.”

While many students were environmentally minded, the group decided that the event may gain more traction if it highlighted how much money students were wasting by throwing food out - $1.17 billion worth of food is wasted annually in New Zealand.

“Students don’t have that much money to go around. If they’re wasting food, that could be prevented, and could save them money.”

“Use up all those things you’re throwing out,” she says. “Use up leftovers.”

When food was dumped alongside waste such as plastics and metals it was not given the chance to breakdown properly, she says, which results in large CO2 emissions.

Overall, New Zealand emits 409,234 tonnes of carbon dioxide a year, equivalent to taking 150,453 cars off the road for one year.

Wasting food was also a waste of resources, Lance added.

“Just a big over all waste of the resources going in to making the food – water, farming, fuel and logistics.”

The Instagram accounts taking part in the Stop Wasting Food Day event are: