Otago PhD student Emma Wade’s discovery of a hidden gene responsible for bone disease is helping families around the world. 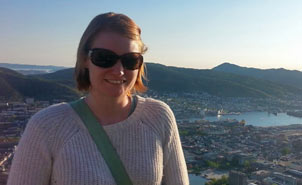 As a young girl in England’s Manchester, Emma was intrigued by the ways of the human body. Like most young children, she was curious when she encountered a person with a physical disability, but her real fascination was with how such disabilities came about. This curiosity eventually led Emma to enrol for a genetics degree at the University of York.

‘Genetics is the study of what makes us us, and, from a medical point of view, what can go wrong when our genes are making us,’ says Emma of what human genetics means to her.

Armed with her genetics degree, Emma returned home in 2010 to become a research assistant in a clinical genetics group at the University of Manchester. There her journey to the heart of hereditary disease began in earnest. She studied heredity eye disease, including the genes of a family affected by early onset glaucoma. ‘The idea is that understanding the genetic basis of hereditary eye disease will help you understand what is happening in the general population,’ she explains.

When Emma decided to pursue a PhD, New Zealand was at the top of her list. Searching for clinical genetics opportunities, she found that Otago, home of Curekids Professor of Paediatric Genetics Stephen Robertson, was the only choice for her to develop her passion for clinical genetics.

Arriving in 2013 to a ‘very quiet’ summer in Dunedin, Emma soon realized she had found a special place in which to pursue her PhD. ‘Where else can you work in a world-renowned research institution and be so close to the countryside, the ocean and the mountains,’ asks Emma. She lives with her partner in a small settlement called the Cove, on Dunedin’s spectacular Otago Peninsular, a calm blue harbour on one side, the wild South Pacific Ocean on the other.

Yet in clinical research terms Emma was by no means arriving at a quiet edge of the Pacific. Her research led to a discovery that is now helping sufferers of bone disease across the globe. Most recently, it saw her awarded a Young Investigator Award for Outstanding Science by the European Society of Human Genetics, during its 2016 conference in Spain.

Emma’s research concerns a bone disease that causes patients to overproduce bone, called frontometaphyseal dysplasia (FMD). FMD is known to be caused by mutations in a gene called filamin A, which was first discovered by Professor Robertson, now her supervisor.

But some FMD patients do not carry the filamin A mutation. The gene behind their bone troubles had remained a mystery and extremely difficult to trace, not least because the known cases mostly appeared to be non-hereditary.

The hunt for such mystery genes has become a little easier since the development of next generation sequencing. This enabled researchers to zero in on the human exome, which codes for proteins and is prime real estate for disease-causing mutations. ‘The exome forms only 2 percent of the human genome, but is home to about 85 per cent of disease causing genetic mutations,’ Emma explains.

Despite this advancement, ploughing through the immense data - a daunting 30 million base pairs - requires the help of powerful computers, which are increasingly important to geneticists. Emma admits that computing was something new she had to get on board with. But fortunately she had great support from other PhD students who have developed the talent themselves.

Using Otago’s next generation sequencing facilities, Emma and her colleagues started with the exomes of three patients. They compared these with their parents’ unaffected genomes to find differences – in short, mutations. ‘We searched for high impact mutations, which would make big changes and so are more likely to be responsible for diseases.’

The results of this approach were exciting and beyond Emma’s expectations.

‘In some ways it seemed lucky, this almost never happens,’ says Emma, recounting the success of her search for the culpable mutation. After analysing the data in a few different ways, Emma succeeded in identifying identical mutations in two of the three exomes. At first, the third case did not show the mutation, but through further analysis she found it. She then ran quality control tests to be sure of the result, all the while containing her excitement.

‘We don’t normally have a ‘eureka moment’, it is more of a realization, as you build up your data and confirm your results.’

But it was not long before Emma’s finding rippled through the global network of clinical labs that were helping patients with similar bone disease. In Melbourne, a lab had found a similar mutation, but did not think it was significant until it heard of Emma’s findings. Over the next two years the mutation was found in 19 more cases.

‘It was good news for the patients. At least now they knew why they suffered from the bone disease. They can now predict and understand the risks for their children.’

This exciting period culminated in Emma winning one of only five Conference Fellowships in Excellence for the European Society of Human Genetics Annual Scientific Meeting.

In May 2016. She went on to win a Young Investigator Award for Outstanding Science for her conference presentation. ‘It was unexpected and very exciting,’ she recalls with a smile.

Also unexpected was Emma’s new found talent for public speaking, which she has developed at Otago. ‘When I began my PhD, I dreaded the public speaking aspects, but now, unexpectedly it is one of my skills,’ laughs Emma, who was also a finalist in the University of Otago’s Three-minute Thesis Competition in 2015.

While travelling to Spain, Emma took the chance to expand on her global connections by meeting with clinicians that she has worked with throughout her PhD. ‘Clinicians from around the world know of our expertise in Otago. When they find that Filamin A is not mutated, they send the case over to us.’

It has certainly been a satisfying few years. ‘I have been lucky in a way. We have a great team and have had great research fellows working with us.’

After completing her PhD in August 2016, Emma intends to further her quest to understand the ‘whys.’ First she will examine the relationship between the genes TAK1 and Filamin A. They are now known to be key switches in the determination of skeletal growth and degeneration, as Emma explains.

‘We know that skeletons increase or decrease in strength in response to force or lack of it: heavy demands strengthen bones but reduced demand weakens your bones. Astronauts, for example, lose bone mass in space, but we are not sure why. We suspect that Filamin A is sensitive to force and transduces this to skeletal growth or reduction.’