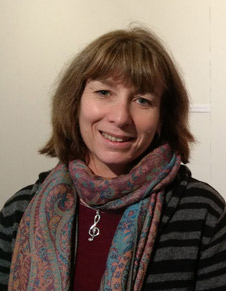 The new Director of Genetics Otago, Associate Professor Julia Horsfield, is thrilled to be taking the helm of the University of Otago Research Centre during an exciting new era in genetics.

The change of guard comes as New Zealand considers the opportunities brought about by rapid advances in genetics, such as fast and inexpensive gene editing and sequencing. Part of the response involves the establishment of Genomics Aotearoa – a new national partnership to improve New Zealand’s capacity in genomic technologies. The $35 million project will be led by Genetics Otago’s outgoing and founding director, Professor Peter Dearden.

That the University of Otago is now home to two of New Zealand’s leading genetics bodies is testament to its uniquely rich vein of geneticists, perhaps the largest concentration of gene boffins in Australasia. Genetics Otago (GO) was created in 2009 to unite this wide-ranging genetics expertise. It now has nearly 200 members across many departments including Biochemistry, Microbiology, Anatomy, Zoology, Botany, Pathology and even Law.

As Genetics Otago’s new director, Associate Professor Horsfield says she hopes to reach out to these diverse groups and extend to more “flavours” of geneticist, building on the strong network established by Professor Dearden.

"I love all things genetics, and I can’t think of anything more rewarding than leading a Centre involving our talented genetics researchers at Otago and beyond."

“Peter has done an amazing job with GO since its inception. GO has really been his baby. It’s a privilege to step in and continue GO’s success.”

She is very excited about the new challenges ahead.

“I love all things genetics, and I can’t think of anything more rewarding than leading a Centre involving our talented genetics researchers at Otago and beyond.”

Associate Professor Horsfield has been at Otago for exactly 10 years, coming here from a Research Follow position at the University of Auckland, to set up the University of Otago’s Zebrafish Facility, now one of the most advanced in Australasia.

An Otago graduate, she completed her PhD in the Department of Biochemistry, looking at how the HIV virus makes many proteins from a single RNA message. Following her PhD she was undertook postdoctoral work at the University of Adelaide.

Her long-standing passion is understanding how genes control how living things develop. Her lab studies how DNA arrangement in the nucleus controls gene expression, zebrafish early development, and how genome structure goes awry in cancer.

As the flagship for the University’s genetics research, Genetics Otago works to engage with the public about genetics' contributions and impacts in New Zealand, through Lab-in-a-Box, and public lectures and events.

“Reaching out to communities throughout New Zealand is increasingly important. The public should be involved in developments that could relate to their health and environment, and we scientists need to understand their perspectives,” Associate Professor Horsfield says.

"GO is an amazing group of people capable of achieving great things. With Julia’s ability and the great people in GO behind her she will be hugely successful."

Professor Dearden believes that together, Otago’s team has put it on the map as the centre for genetics research and teaching in New Zealand, and even internationally. His final act as Genetics Otago Director, apart from leading the set-up of Genomics Aotearoa, was hosting the Annual Conference of the Genetic Society of AustralAsia, which attracted renowned geneticists from around the world.

He looks forward to seeing his ‘baby’ grow into new ideas and enterprises under Associate Professor Horsfield’s leadership.

“GO is an amazing group of people capable of achieving great things. With Julia’s ability and the great people in GO behind her she will be hugely successful.”

He also thanks the people in GO for all of their work while he was Director.

“They are outstanding and the real reason behind GO’s success.”

For all geneticists, experienced and new, it’s a time of continual learning and upskilling to keep up with the fast pace of genetics research. For Associate Professor Horsfield, it’s onwards and upwards.

“We will build on the things that GO does well already, including bringing our genetics community together with conferences and workshops, so we can build capacity and deepen our connections with the community.”