An Otago Master of Planning graduand who completed his thesis on cultural heritage protection within the wider Ihumātao peninsula says the ongoing situation is complex and filled with tensions at various scales.

Hundreds of peaceful demonstrators have been engaged in a stand-off for more than three days at Ihumātao near Mangere, while several protestors have also been arrested. However, the occupation of the waahi tuupuna has been ongoing for more than two years.

The situation unfolded when the Ihumātao land that was confiscated 150 years ago was designated for urban intensification under the Special Housing Area (SHA) legislation. 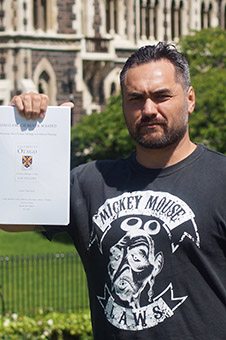 Cassino Doyle (Whakatohea me Te Rarawa) focused his University of Otago Master of Planning (MPlan) thesis on the impacts of a designated housing area on culturally and archaeologically historical sites such as Ihumātao.

He says current demonstrations can be compared to a ‘contact zone’, where a number of underlying tensions are being expressed.

“Firstly, the Special Housing Area legislation provided fast–track consenting with limitations on public consultation – even for places which have a significant cultural value,” he says.

“What we are seeing is a tension between a highly Westernised concept of heritage that prioritises material remains and site specific evidence over recognition of cultural values and the layers of meaning and connections within a landscape.”

The research explored other tensions, including who has the mandate to speak on behalf of a community, and over the different approaches taken to influence decision making spaces.

Doyle says the approach taken by Save Our Unique Landscape (SOUL), a mana whenua group which includes members whose family have lived in the area for generations, is rooted in social transformation and social mobilisation theories, which are inspired by visions of a more just, democratic, egologically sustainable and emancipated society.

While the situation is complex on a number of levels, the central issue is of power, he says.

“One of my informants referred to the situation as a 150-year plus legacy of harm and systematic degradation of the mauri [spirit] of the cultural landscape that is the Ihumaatao Peninsula,” he says.

Doyle says the demonstrators and the mandated iwi representatives had both achieved something.

“The different approaches of the demonstrators and the mandated iwi representatives have each demonstrated value in terms of an ability to influence decision making, enhance social connections and empower their communities.

“One approach is participating within the available invited spaces, through direct negotiation with the developers to achieve outcomes that way. Negotiations for an 80 metre buffer around the base of the maunga and maintaining a viewshaft from the papakainga through sensitive design, for example.

“The other approach has been to disrupt power imbalances through creating their own ways to influence decision-making and challenge the status quo.”

He says the systemic and structural forces, such as the limitations placed on public engagement through the Special Housing Area (SHA) legislation and eurocentric concepts of heritage, have acted as a catalyst for what is playing out at Ihumātao.

One thing the Ihumātao situation has done, Doyle says, is illustrate the importance of recognising the concept of cultural landscapes (waahi tuupuna). He says this needs to be better incorporated into how heritage and sites of significance are managed.

“Engagement by mana whenua via consultation in the Ihumātao Peninsula has not resulted in a disruption of the power imbalances that would otherwise allow for effective protection of cultural heritage, waahi tapu and the wider cultural landscape.

“There needs to be better acknowledgement of cultural elements across a landscape. Enhanced recognition of this concept will create a mechanism to evaluate the cumulative effects over time on cultural values.”