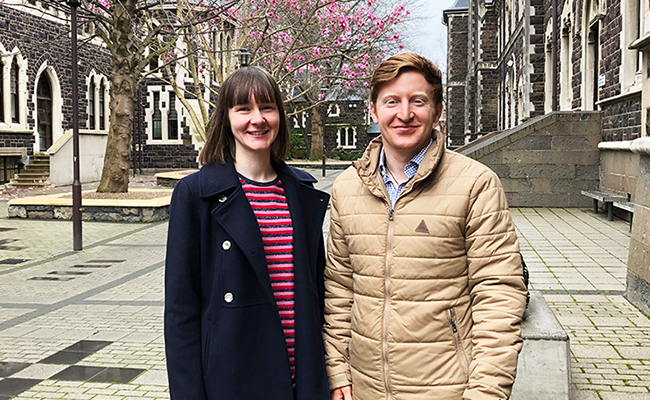 Holly Still, from the Department of Geology, and Taylor Hamlin, from Zoology and Maths and Statistics, will each receive funding over the next two years to assist their research.

Both students are already immersed in Antarctic-related research; Holly having made two trips to the Ice, while Taylor spent two months during last summer at a field site 70km from NZ’s Scott Base.

This is the second Antarctica NZ postgraduate scholarship that Holly has been awarded, the first one which supported her Masters of Science in Surveying.

During that time, Holly undertook her first trip to Antarctica as part of the Ross Ice Shelf Programme that was led by Professor Christina Hulbe, the Dean of the School of Surveying.

“It was the combination of the landscape, fieldwork, and captivating science during that trip that inspired me to continue with research in Antarctica and pursue a Doctorate."

“It was the combination of the landscape, fieldwork, and captivating science during that trip that inspired me to continue with research in Antarctica and pursue a Doctorate,” Holly says.

Last summer she was part of Geology’s Professor David Prior project team based at the Priestley Glacier to retrieve ice core samples from the shear margin, and to conduct a range of surveying and seismology work.

The nine-person team spent three weeks at the remote field camp located about 400 km from Scott Base, and they returned to Otago with a heap of data and 58 metres of ice core samples.

Currently about halfway through his PhD thesis, Taylor Hamlin is part of a Manaaki Whenua Landcare project researching the feeding habits of Adélie penguins at Antarctica’s Cape Bird.

He undertook a population modelling project on pest species as part of his honours degree in Ecology which then led to this opportunity with the Adélie penguins.

“At heart I’m an ecologist but I enjoy using statistical approaches as an attempt to formalise the chaos,” Taylor says.

Last summer he was part of a small team that stayed in a hut at Cape Bird for about two months, arriving just after chicks hatched at the end of November, and leaving just before they were due to leave the colony.

About 80 birds were tagged and monitored for food, weight, and movement, and chick growth and behaviour were also observed, with the aim being to further understand of the factors influencing breeding success.

“Spending that amount of time with the penguins – for about ten hours a day for two months - certainly puts ecology into perspective,” Taylor explains.

“It is a very exposed site and it’s common to witness quite brutal social behaviour in the colony.”

He also says it’s pretty noisy and smelly, and the penguins are surprisingly strong and vicious to work with, but he realises how fortunate he is for having this unique experience.

“I’m very grateful for the scholarship as a validation of this work,” Taylor says, “and it’s also a great peace-of-mind financially for finishing the thesis.”