The Rowheath is awarded to early career staff who have been at Otago for at least two years and who are in the first ten years of their research career. Recipients must demonstrate outstanding scholarly achievement that enhances the understanding, development and well-being of individuals and society. 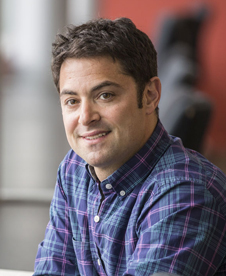 Ben Schonthal is Professor of Buddhism and Asian Religions who came to Otago in 2013. His research examines the intersections of religion, law and politics in South and Southeast Asia, looking especially at topics such as Buddhist law, legal pluralism and comparative constitutional law.

Since 2020, he has co-directed the Otago Centre for Law and Society (OCLaS), which is dedicated to supporting the social scientific and humanistic study of law across the University.

Ben has enjoyed success securing grants, including Fulbright, Mellon, National Science Foundation and a Marsden Fast Start and has consulted with governments, courts and NGOs on topics relating to religion and law.

He is the author of Buddhism, Politics and the Limits of Law (Cambridge University Press 2016) and more than 30 chapters and articles in journals such as The Journal of Asian Studies, Journal of the American Academy of Religions, the American Journal of Comparative Law and the International Journal of Constitutional Law. Ben’s current monograph, Law's Karma, examines the politics and practice of Buddhist law in contemporary South and Southeast Asia. He is also editing two books, one on legal pluralism in Asia and the other on Buddhism and comparative constitutional law. In 2016 he received the Otago University Award for Distinction in Research (Early Career).

Ben has won awards for his teaching and supervision at the University of Chicago and Otago, including being named one of the "top ten teachers" and finalist for "supervisor of the year" by the Otago University Students Association. In 2019, he received the University of Otago Excellence in Teaching Award. He has supervised numerous postgraduate research students – his three most recent PhD students were awarded exceptional thesis status.

“I am extremely grateful for this award and it’s particularly special to share it with my colleague in the Religion Programme, John Shaver.”

Associate Professor John Shaver came to Otago in 2016 and has been Religion Head of Programme since 2019. 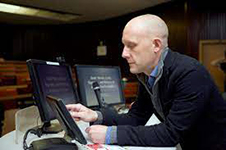 In addition to teaching on the psychology and evolution of religion, John currently leads two externally funded projects; the first is a Marsden Funded project to collect longitudinal ethnographic and cooperative network data from individuals living in Fijian villages and informal settlements, which hopes to provide the data necessary for understanding of the dynamic interplay between religious institutions, cooperation and social inequality.

The second, “The Evolutionary Dynamics of Religion, Family Size, and Child Success" project, received $3.8million from the Templeton Foundation.

John is President of the International Association for the Cognitive and Evolutionary Sciences of Religion, past President of the New Zealand Association for the Study of Religion, and he sits on the advisory board for the New Zealand Attitudes and Values Study (NZAVS). Some of John’s work, conducted with other NZAVS researchers, has helped the government’s ongoing response to the 2019 mosque attacks.

He is also editor of Micronesia, Melanesia and Polynesia for the Database of Religious History. In 2019 he was awarded a University of Otago Early Career Award for Distinction in Research.

John’s research has appeared in anthropology, biology, neuroscience, religion, and psychology journals and has been covered by National Geographic, Time Magazine, The Independent, The Huffington Post, Al Jazeera, South China Morning Post and over a dozen other news outlets.

“It is a tremendous honour to win the Rowheath Trust Award and Carl Smith Medal. To receive the award alongside Ben Schonthal, a colleague and friend, makes it even more special.”