Yes we can! Pre-schoolers as competent evaluators of their city

The majority of children grow up in urban areas (UNICEF, 2012). While we have a good understanding of how primary school children and young people use the city and what they like and dislike about city life (for an example have a look at our projects on children’s seasonal play in urban environments or natural neighbourhoods for city children), we actually don’t know how children under five years old experience their cities. We don’t know where they go, what destinations they use in their neighbourhoods or what activities they like to do. We also don’t know what they think a city should look like and what they think could be done differently to make their participation in urban life fun and relevant. Therefore, this project looks at pre-school aged children’s (3-5 year olds) experiences and perceptions of their urban environment and what they imagine as an ideal urban environment for growing up healthy and socially connected.

The overall aim of this research was to investigate pre-schoolers’ experiences in, understanding of and visions for their city. In particular we were interested in answering the following questions:

In our research we adopted a process that treats pre-schoolers as competent social actors and knowledgeable citizens. We invited pre-school children aged 2-5 years from three kindergartens in Dunedin. The child care centres, parents and children needed to consent to the project before the start. We ensured that the children knew how they would engage in the study and they had the choice of opting in or out of particular elements of the data collection or stopping at any time during the process when they had enough. However, to our and the teachers’ surprise all participants were very keen on the project and engaged for long periods of time which could exceed two hours.. One reason could be that we used the following child-centred methods. We created the methods that made their participation fun and relevant.

We chose these methods to ensure pre-schoolers could engage in a range of verbal, visual and experiential research activities. In doing so, they were able to communicate in various ways their experiences, understanding and visions for their city.

What can we learn from children’s neighbourhood walks?

The majority (eight of the ten) of children were able to direct the purpose, direction and destination of their neighbourhood walks. They took us to places they were familiar with, regularly walk to and are meaningful for them (e.g. their kindergarten, playgrounds, houses they had previously lived in, bushwalks they do frequently). They clearly knew their neighbourhood as for example, one of the children pointed out that if we walk to their neighbourhood park, the walk back up the hill will be tiring.

Often with a big smile on their faces, the pre-schoolers proudly showed off the places, activities and features in their neighbourhood that they like or dislike.

Common interest in and engagement with natural features in their neighbours 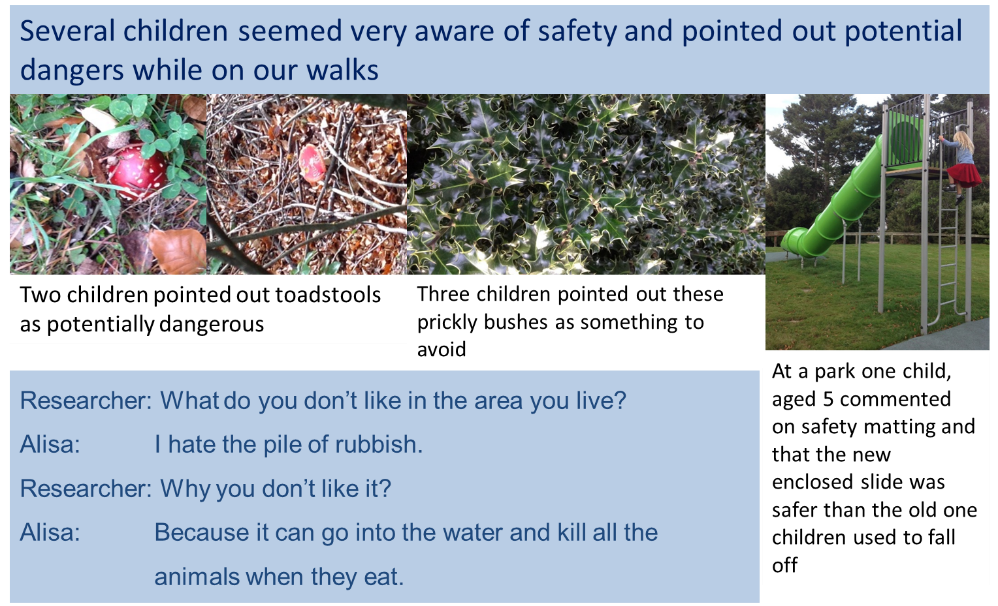 Being on the neighbourhood walks, children clearly indicated a deep understanding of the micro worlds in their neighbourhood.

What can we learning from children's mapping exercise?

The main findings from the results were that children are generally aware of their urban environments. The majority of participants were able to build at least some elements of a city, with several being able to create entirely replicable cities.

Although children’s city designs were quite diverse in approach, they all purposefully selected the elements they needed for their cities. Children clearly created their ideal city based on their experiences using their city. They also gave examples of problems, for example, one boy drew glass on the footpath as something that happens in cities.

In terms of the number of tiles used, calculated by adding up all tiles used by the 27 children the most used were:

The majority of children thought not only about what are important, enjoyable and useful amenities for their age group, but they included health and basic services that everyone can use and make city life safer (e.g. 59% had hospitals and 40% ambulances; Fire stations 40% and Fire engine 48%, Townhall 37%; Kindergarten 56%; School 52%, Church 22% and Supermarkets 66%, 56% Police Cars, 52% Police Stations).

Examples of diverse services and features children included in their cities. 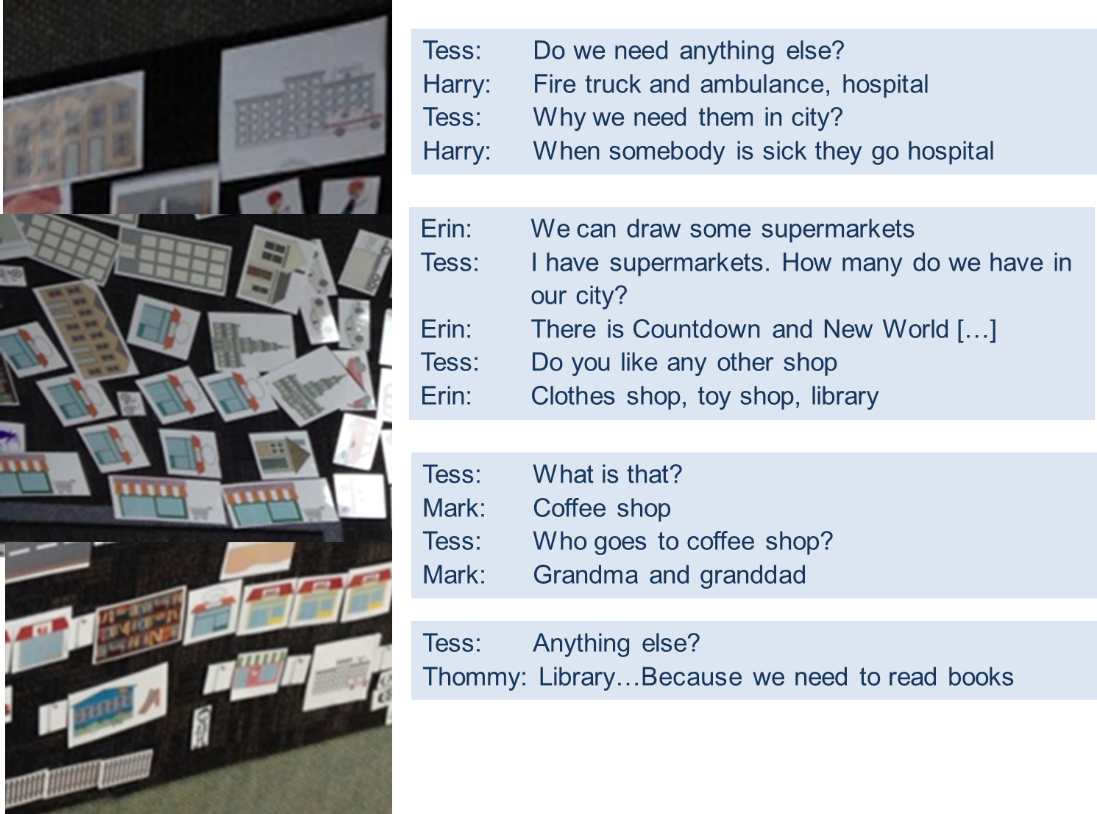 Examples of safe and secure environments that children wanted to have included in their cities.

The most important finding from the data was that pre-literate children are able to understand and communicate about the urban environment. The use of tiles and mapping exercises with the children enabled them to illustrate their understanding of cities in a way that they enjoyed and demonstrated their competency in reflecting on large scale city environments.

By using visual and sensory research methods, that combine research and play, this study enables pre-literate children to articulate their understanding and experiences of living, playing and learning in an urban environment enabling them to make meaningful contributions to urban debates and alternative city futures within children's geographies, education and planning communities.

Dr Christina Ergler has undertaken research on health and wellbeing in the past eight years focusing on the health care system in India and children’s wellbeing in urban environments in New Zealand. Through this work she gained extensive experiences in participatory research with children. She has published a number of empirical and methodological articles and book chapters concerning the relationship between place, health and wellbeing and children’s geographies. (email: christina.ergler@otago.ac.nz).

Professor Claire Freeman has been working in the field of children and planning since 1994 and has published widely in this field. She has also worked on a number of projects working with children in New Zealand and in Dunedin specifically. (email: claire.freeman@otago.ac.nz).