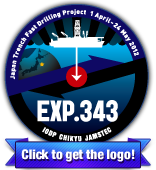 Dr Virginia Toy (Department of Geology, University of Otago) will be one of the scientists on-board responsible for analysing and interpreting data arising from geophysical measurements down the borehole, and for documenting and describing the structural geology of any core that is recovered.

Information will be added to this page and links will be provided to other sources as the project progresses. Check out the news feed below for the latest J-FAST news.

Other sources of information