Pelagiarctos thomasi not a "killer" walrus

The middle Miocene Sharktooth Hill Bonebed in central California is one of the most spectacular marine mammal fossil assemblages worldwide. In the 1980's, a jaw fragment and several isolated teeth were found to be different than other fossil pinnipeds (seals, sea lions, and walruses) from the same locality. Their large size, sharp cusps and cutting edges, and rarity of the specimens led to the interpretation that they belonged to a massive sea lion-like walrus that preyed upon other marine mammals and marine birds, similar to modern leopard seals. This hypothesized "killer" walrus was named Pelagiarctos thomasi.

We studied the anatomy of a new fossil of Pelagiarctos from the "Topanga" Formation southern California which was slightly more complete, leading to an alternative interpretation of the feeding ecology of this enigmatic fossil walrus. We estimated it to be similar in size to a modern New Zealand sea lion, and despite its large size, the new fossil – and the original specimens – did not appear to have adaptations for killing and eating large prey items. When we examined the published literature on modern pinniped diets, we found that there is little correlation between diet and tooth anatomy. Most modern pinnipeds are dietary generalists, and even though some sea lions and the walrus occasionally eat seals and marine birds – their diets usually consist of fish (or clams, in the case of the walrus). This new study serves to further our understanding of the ecology of fossil marine mammals. 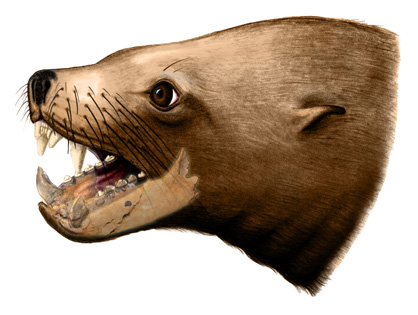