A new species of gecko: What’s in a name and why it matters

Formerly known as Duvaucel’s gecko, this distinct species, which comprises only about 600 mature individuals confined to Cook Strait’s Ngāwhatu-kai-ponu (Brothers) and Kuru Pongi (Trios) Islands, has been given the te reo Māori name te mokomoko a Tohu (Hoplodactylus tohu). 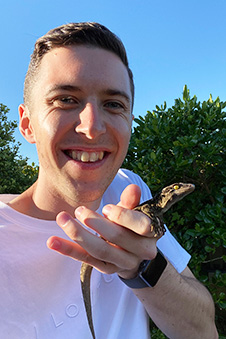 Lead researcher Lachie Scarsbrook, who undertook the study in the Department of Zoology, says that even though these geckos were previously regarded as the same species as those living on islands off the northeastern North Island (Duvaucel’s gecko), scientists have known for years that there were differences between these southern and northern lineages.

“The Brothers and Trios Islands geckos are smaller, have different colours and patterns on their bodies, and possess unique genetic signatures, which are all the ingredients needed to describe a new species,” Mr Scarsbrook says.

“It wasn’t until we used cutting-edge ancient DNA techniques to reconstruct the diversity in now-extinct North and South Island mainland populations that we realized just how different they really are. Over five million years to be exact.”

Published in the international peer-reviewed journal ZooTaxa, this paper describes te mokomoko a Tohu, made possible by a new non-destructive method of obtaining genomes from tiny bones without destroying them.

“By recognizing Hoplodactylus tohu as distinct, the two small populations on the Brothers and Trios Islands, and those recently translocated to Mana Island, are now the last surviving members of this new species,” Mr Scarsbrook says.

“This has elevated their threat classification, with both Duvaucel’s gecko and te mokomoko a Tohu now receiving ‘critically endangered’ status on the IUCN Red List.

“While these islands have proved a sanctuary from rats and other introduced predators over the past few centuries, the effects of changing climate, as well as predator incursion, pose significant risks to the survival of te mokomoko a Tohu.”

The name acknowledges her tupuna Hone Kākahi, prominently known as Tohu Kākahi, who was one of the first recognized pacifists, for his work in the decades leading up to the invasion of Parihaka.

After being taken prisoner, Tohu subsequently journeyed by sea to Whakatū [Nelson], passed the Ngawhatu Islands, and covered the entire prehistoric and modern range of te mokomoko a Tohu as he made his way to Ōtepoti [Dunedin].

Mr Scarsbrook, who is currently completing his DPhil at the University of Oxford, says this description of a new species has been an immense and extremely satisfying process to undertake in collaboration with the local iwi.

“By using a te reo Māori scientific and common name for this species – te mokomoko a Tohu (Hoplodactylus tohu) – we hope to highlight the importance of iwi engagement and collaboration in science, especially in ensuring our taonga species are named appropriately into the future,” Mr Scarsbrook says.

He says the process also highlighted the conflicts that exist between the International Code of Zoological Nomenclature (ICZN) rules for scientific naming and te reo Māori.

“With the scientific names given to species carried in perpetuity, taxonomy has the capacity to save a species or drive their extinction. My hope is that te mokomoko a Tohu can become part of growing global discussions concerning the rigidity of taxonomic nomenclature.”

He adds that further studies using these novel techniques, which have resulted in the recognition of te mokomoko a Tohu, are desperately needed to inform evidence-based conservation management, leading to effective kaitiaki [guardianship] practices.

“Scientists, conservationists and Tangata Whenua cannot hope to save species from extinction if we don’t know what species are out there,” Mr Scarsbrook says.

“Our ancient DNA research on Hoplodactylus geckos has only just scratched the surface of what we know about the diversity of geckos, skinks, frogs and tuatara at the time of human arrival in Aotearoa, and how it has changed in the time since.”