Australian getting under surface to determine Otago’s quake history 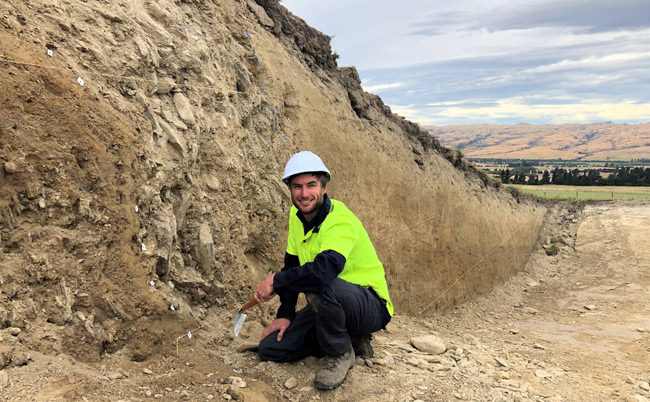 Geology PhD candidate Jonathan Griffin at his field research site on the Hyde Fault. This trench uncovered a perfect hanging wall of the fault, and a closer examination of the layers will help determine the timing and size of historic earthquakes.

Earthquakes weren’t part of Jonathan Griffin’s upbringing in Australia, but when he visited Pakistan at the end of his undergraduate geology degree in 2005, it coincided with the devastating Kashmir earthquake.

That changed his future path.

Instead of the hiking trip Mr Griffin had planned, he spent his time volunteering in quake relief and his interest in earthquakes piqued after experiencing “the sheer scale of what they are capable of doing”.

Otago is considered one of these regions, but with three local faults showing evidence of seismic activity prior to 1840, it is not immune to the potential of future damaging quakes.

The Hyde Fault, located about 50km in a straight line from Dunedin and responsible for the uplift of the Rock and Pillar Range, is the closest major unstudied active fault to the city.

The Hyde Fault is also the first site for Mr Griffin’s research, where two large trenches have been excavated across the fault to expose the underlying layers of deformed sediment.

“We can see layers of silt and rocky alluvial fan materials that have been folded up and offset in an almost U-shape in the hanging wall of the fault,” Mr Griffin says.

“What we do is try to unbend and reconstruct those layers to determine what the original deposits would have looked like.”

With a careful eye, these layers are meticulously marked out and analysed for connections, and this information is then used to accurately measure how far layers have been offset across the fault during earthquakes.

When this information is combined with sediment sample dating, a record of the frequency and magnitude of pre-historic quakes that have ruptured the fault can be determined.

“The goal of this research is to develop a better understanding of historic seismic events in this area of Otago, which will ultimately inform local seismic hazard and risk management,” Mr Griffin says.

Mr Griffin’s research also contributes to a multi-year programme led by his supervisor and chair of Earthquake Science, Professor Mark Stirling, aiming to improve the characterisation of seismic hazard in low-seismicity regions of New Zealand, and inform the national seismic hazard model.

“New Zealand has a lot of earthquake expertise, so I naturally jumped at the opportunity to do this research with Professor Stirling,” Mr Griffin adds.

“A region like Otago is a good seismic analogy to Australia, so what we learn here will be really useful for future Australian seismic hazard models.”

Prior to moving to Dunedin with his family to complete a doctorate, Mr Griffin worked for Geoscience Australia on a range of earthquake and tsunami hazard assessment projects in both Australia and Indonesia.

Griffin's PhD is being supported by a Development Grant from Geoscience Australia, and field work is funded by a University of Otago research grant.