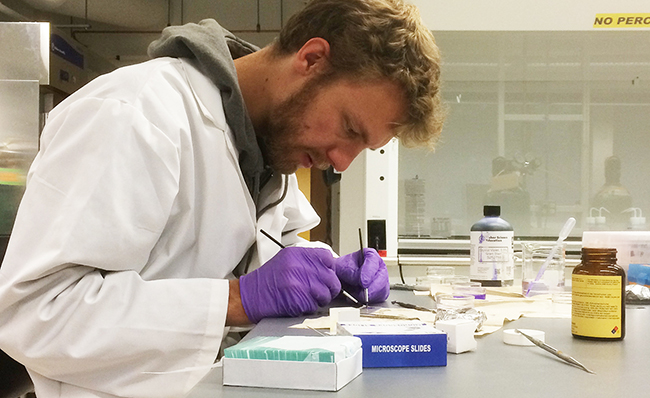 The research, published in the European Geosciences Union journal Climate of the Past, is the first of its kind to measure how ancient plants respond to living in a world with elevated levels of carbon dioxide.

Lead author Dr Tammo Reichgelt, paleobotanist at the University of Connecticut and former University of Otago PhD student, says the leaf fossils from Foulden Maar date from the early Miocene when Central Otago supported rainforests in global temperatures of about 5–6 degrees higher on average than today.

“Because the leaves at Foulden Maar are mummified, the site presents a very rare opportunity to make anatomical and chemical measurements on the leaves that translate directly to climatic and atmospheric conditions at the time the forest was growing,” Dr Reichgelt says.

“Our results suggest that during the time when the rainforest around Foulden Maar existed, the amount of carbon dioxide in the air was between 450 and 550 parts per million which is about 20–30 per cent higher than today and similar to levels projected in about two decades time.”

“Surprisingly, trees that grew around Foulden Maar 23 million years ago in higher carbon dioxide conditions appear to be better or as good at conserving water as a modern-day tree in much more water-stressed environments, such as the Australian outback.”

Studying the response of plants at Foulden Maar growing in a warmer, high carbon dioxide world may provide researchers with a model for what changes in plant function might look like in the future.

“If there is more carbon dioxide in the atmosphere, a plant can obtain the same amount of carbon dioxide without wasting as much water, as its pores do not have to be open as long. What this means is that plants can effectively become more drought tolerant.”

In the not-so-distant future, this means that environmental conditions may be more favourable to plant growth and forest expansion: a global greening effect.

However, Dr Reichgelt says that it's hard to predict the winners and losers in a future environment of elevated carbon dioxide and global temperatures.

“Shifting habitats, whether due to temperature or due to increased drought tolerance, puts stress on plants, especially those that require stability, such as long-lived trees.”

Associate Professor Lee and her colleagues have written more than 40 papers based on research from Foulden Maar, an ancient crater lake located near Middlemarch containing large deposits of diatomite and preserving an ancient rainforest ecosystem.

“The preservation and range of fossils is absolutely extraordinary – from leaves and flowers to fish – including the world's oldest galaxiid fossils,” Associate Professor Lee says.

“In addition to this current study, two other papers from Foulden Maar have also just been published; one a review on all fossil Galaxias known which all happen to be from Otago, while the other study documents the first fossil rove beetle from the Southern Hemisphere.”

Foulden Maar is currently inaccessible for research due to receivership proceedings, but the on-going publication of research demonstrates the site’s importance and value to science.

Dr Reichgelt says the current research continues to highlight the potential research output from this scientifically valuable site that came close to be used for pig food and palm oil fertilizer.