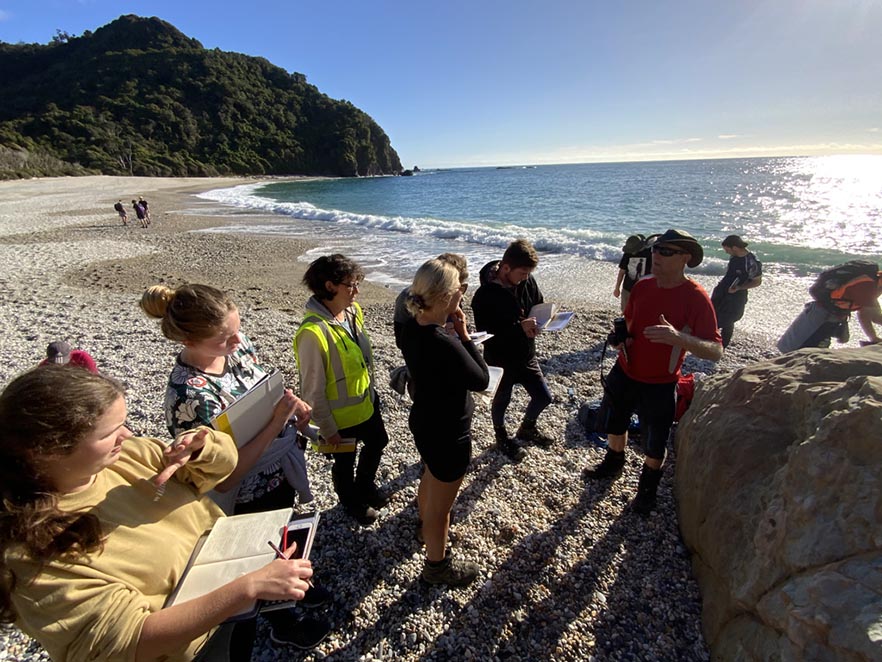 Through their generous gift to the Otago Foundation Trust, the Nauman Geology Fund aims to improve the skill set of geology students, enabling them to become more competent field geologists when they graduate and embark on their careers. The fund is specifically for the purpose of developing the geological field mapping skills of students at 300 and 400 level.

To achieve this, the Naumans’ gift will support an annual field trip, aimed at broadening exposure to new geological environments. The trips will include a component of student assessment in geological field mapping.

“In the last 5–10 years we have seen a diminution in field skills of geologists graduating from universities – whom we employ at our company – who have the appropriate amount of field experience to be competent, accomplished geologists,” says Clynt, who graduated from Otago with a BSc(Hons) in 1971 and began his career as an exploration geologist. He moved into the mining business in the mid-1980s, working primarily in precious metals and base metals, and is Chairman and CEO of Alexco Resource Corporation.

Jan studied at Western Washington University, where some of her teachers were Otago graduates. The couple met in the late 1970s and their work has been based primarily in Alaska, and the Northwest Territories and Yukon Territory in Canada.

“For quite some time we had been thinking that somebody needs to draw attention to the fact that geologists coming out of school these days are not fully skilled to undertake field geology work. In our opinion the ability of geologists to be able to work in the field, recognise rocks, and be able to produce geologic maps and sections, is fundamental to their success.”

Clynt is originally from Alexandra, and he and Jan regularly visit family in New Zealand. They were at their crib in Wanaka when the pandemic took hold and lockdowns started occurring in the United States.  “We came back for a month and now it’s a year and a half later,” he says.

During this time, Clynt struck up a conversation with Emeritus Professor Alan Cooper from Otago and discovered that field trips to the Alpine Fault on the West Coast were no longer offered as part of the course. Neither were field trips to the North Island to view important volcanic processes.

“The Geology department at Otago, like a lot of other Geology departments around the world, has been stretched for funding, and some of the field activities that were part of the geology course when I was at university have subsequently been dropped because they didn’t have the funding available, so it seemed like a natural fit.”

As a student, Clynt was required to do a couple of major field projects, and says he was fortunate enough to be supported to study in a remote part of New Zealand, producing a geologic map in an area that hadn’t been mapped in detail before. That experience has always stood him in good stead going into new geologic environments. His thesis area was next to the Alpine Fault, which is a field environment he is keen for today’s students to experience.

“New Zealand on the global stage is a very important part of the evolution of the Earth. There are active geologic processes in New Zealand that a lot of geologists in other countries and other areas do not get to see. One is the Alpine Fault, which is the point of connection between two major tectonic plates on the Earth’s surface.”

He says it was unfortunate geologists were graduating without the benefit of being able to visit the Alpine Fault “and physically put one hand on the Pacific Plate and the other hand on the Australian Plate. There are not too many places in the world that you can do that”. 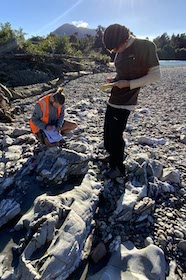 After speaking with the department and the Development and Alumni Relations Office, the Naumans decided they wanted to provide support to re-establish the field trips. Planning for the first trip began at the start of the year, and the Geology Alpine Fault Field Trip to the West Coast went ahead at the beginning of May. Over four days, students covered themes including the development of the Southern Alps and their rocks; the inception, evolution and threat of the Australia-Pacific Plate boundary; and glacial landscapes.

“I think it’s very important for the geologists and I think it’s important for the Geology department. Without overstating the case, I think it would be very attractive for overseas students to be involved in a course that exposes you to unique global geologic processes that can’t necessarily be seen in other parts of the world,” says Clynt.

Director of Development and Alumni, Shelagh Murray, says this generous gift will have a major impact on future Geology graduates and the University is very grateful to Clynt and Jan for their support.

Head of the Department of Geology, Associate Professor Andrew Gorman, says the Naumans’ support for the field programme has had “a noticeable effect on the enthusiasm of our students for studying geology”.

“The support gives them affirmation of the relevance and usefulness of their chosen career path. As the world addresses the challenges of a low carbon future, field geologists will continue to play a critical role in acquiring the resources needed to replace coal, oil and gas with greener forms of energy production and transmission,” he says.

On their way home from the field trip, the students joined the Naumans for lunch in Wanaka and a boat trip out to an island on the lake to study some unique geology.

“It was very apparent that they enjoyed the [field] trip. I could see in some of those students that really it had had an effect on their view of geology. I don’t know if you’d call it a light bulb type moment, but some of them, for sure, were very engaged,” says Clynt.

“We’ve covered topics like the Australia-Pacific Plate boundary in classes, but actually being able to walk around, touch and map the fault zone makes a huge difference to a student’s understanding. Many of the students have told me they loved the field trip,” he says.

Throughout his career, Clynt has stayed in touch with Otago indirectly through contact with other Otago geology alumni. The core of his current geological team consists of Otago graduates.

“As we moved around between different jobs, we came across quite a number of Otago graduates, mostly from the 1970s era because that was when we were at school. So the association with Otago has generally been sustained by continuing to work with those people, up to and including at least one of the lecturers under which I was a student, who now actually works for us in the Yukon,” says Clynt.