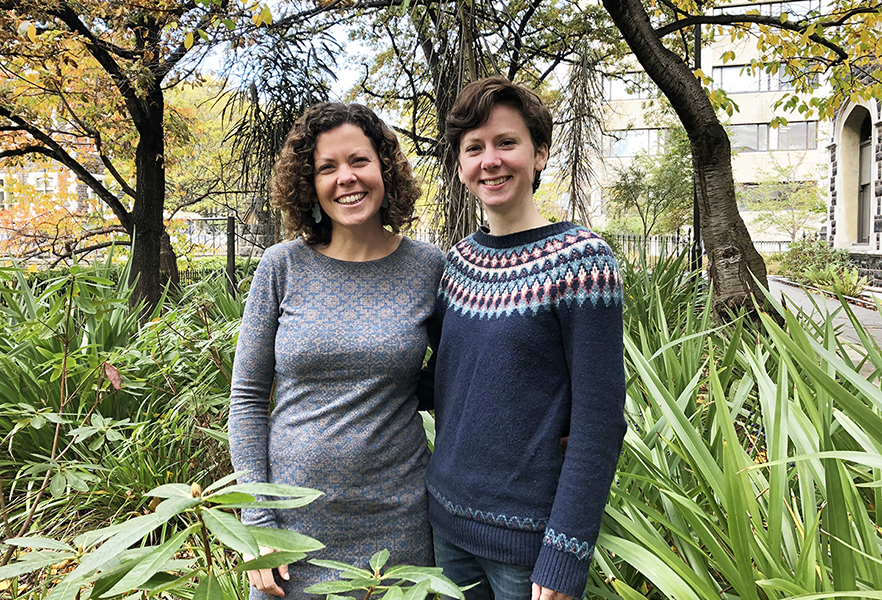 Photo: Sisters Dr Cathy Cole (left), a Lecturer in the Centre for Science Communication, and Dr Rosie Cole (right), a Postdoctoral Fellow in the Department of Geology.

Between them they have clocked up three research expeditions to polar seas, forty ascents of Mount Tongariro, thousands of hours in a Scottish coral culture lab, and organised a ton of wax to mimic an eruption.

A sense of adventure, wonder, discovery (and some quality hand-crafting) thread through the lives of two sisters from the UK who have found themselves both working in science at Otago, 18,000km from home.

Raised in Kent as two of six siblings, and born six years apart, Dr Cathy Cole is a Lecturer in the Centre for Science Communication and Dr Rosie Cole is a Postdoctoral Fellow in the Department of Geology.

From early years, the two were connected and united by a curiosity in the world which developed into a passion for science and research focused on the Earth’s impact on us, and our impact on the Earth.

The sisters’ natural curiosity for environmental sciences and drive to conserve wild places was seeded by family camping trips around the UK and Europe to areas of awe and splendour.

“Our mum, Deborah, has a PhD in geography and archaeology, so she fuelled our interests in the natural world, deep time and landscape formation, and also normalised women in science and academia,” Rosie says.

Cathy also recalls other subtleties of inspiration such as a poster that hung above the tattered wooden benches in their school’s chemistry lab proclaiming Not all scientists wear white coats.

The environmental science seeds had germinated but being together on the other side of the world at the University of Otago was never in their grand plan.

Rosie was the first to arrive at Otago to begin a PhD in 2015, and three years later Cathy followed with her husband Drew Oliphant, who had secured a postdoc position in Biochemistry. Cathy and Drew had fallen for Dunedin while on their honeymoon in 2016. Ultimately, it all came together when Cathy also landed her ‘dream’ job in the Centre for Science Communication.

Rosie’s path to geology was energised by the spectacle of volcanic eruptions on land, under the sea, and beneath glaciers, which sparked an interest in studying the interaction between volcanoes and the environments they erupt in to. For her PhD, she studied past eruptions on Ruapehu and Tongariro volcanoes when large glaciers capped the two mountains.

In her current work as a postdoc in the Geology Department, Rosie studies external controls on volcanic fissure eruptions and her research group is building an innovative new machine to model magma ascent through cracks in the crust.

“This will be the first apparatus of its kind that has the capability to vary crack shape and temperature and will be used to determine how these properties influence the locations of volcanic eruptions,” Rosie explains. Molten wax is been used as the experimental ‘magma’ for the project because it behaves in a similar way when it cools.

Meanwhile, Cathy fell in love with the oceans as an undergraduate at Durham University and found a wild magic in the world below the waves. She moved to Southampton to study a MSc in Oceanography at the National Oceanography Centre and stayed for a PhD in deep-sea hydrothermal vent biogeochemistry. Her first post-doctoral position at the University of St Andrews in Scotland explored marine climate change impacts on tropical corals.

Through her research in marine geosciences, she developed a deepening fear of the changes underway on our planet due to climate change which motivated her progression into communicating science.

Cathy took up a position within the UK Met Office Hadley Centre Climate Programme, delivering the latest climate change research for policy teams in Government. Central to this role was communicating complex science in accessible and relevant ways, often to very tight deadlines.

Now based in the Centre for Science Communication, Cathy says her ambition is to craft messages with meaning to empower positive change, and to nurture this practice in students studying at the Centre.

Cathy says it’s exciting to be part of a department that thrives on creative skill, as well as academic merit, which includes leading a research project that aims to bring ocean climate data to life through immersive workshops with community groups.

The sisters agree that while it’s hard being distant from their family, especially in the current COVID-19 environment, they are fortunate to have each other and relish their common interests of running, hiking, and craft evenings.

Rosie was also the family member to be in New Zealand for the birth of Cathy’s son Eben who is now almost a year old.

Living in the same town and working at the same University on the other side of the world is about to come to an end however, as Rosie’s departure for Iceland looms in June.

She is moving to take up a Marie Curie-funded fellowship at the University of Iceland where she will be conducting research on Katla volcano, looking at the interaction between the volcano and past glaciers during cooler periods of Earth’s climate.

“Working in Iceland has been the dream for me for a long time, so I am really excited for this opportunity and to spend a few years living in such a magical place,” Rosie says.

While Rosie admires in Cathy her “broad curiosity and creativity in how she embraces the many opportunities that have arisen”, it’s Rosie’s strong sense of independence and direction in geology which Cathy respects.

“I’m in awe of Rosie’s success, and working in academia. I know what an incredible achievement getting a Marie Curie fellowship is,” Cathy says.

“We will miss her terribly, and I know Eben will too, but I’m just so proud of her, and I know our whole family are too.”