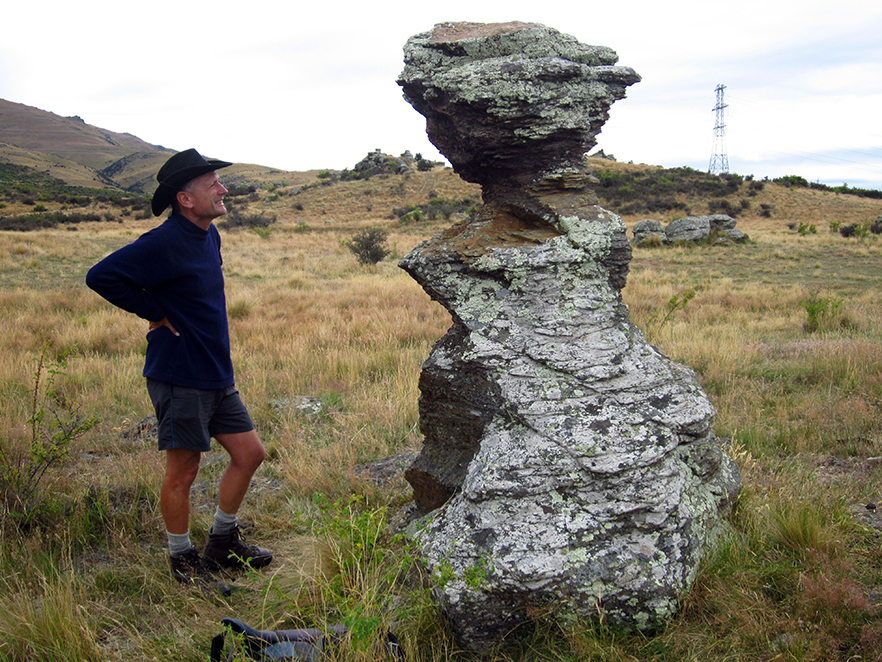 Professor Mark Stirling with one of the rock formations near Clyde Dam. Photo: David Barrell.

Balanced rocks, poised in position for 24,000 years, have been used to assess the current seismic integrity of the Clyde Dam in a University of Otago-led study.

Professor Mark Stirling, of Otago’s Department of Geology, along with New Zealand and international colleagues, identified and assessed the ages of gravity-defying rock formations located about 2kms from the dam site. They used this data to determine the peak ground accelerations the rocks could withstand before toppling.

The information was used to set the Safety Evaluation Earthquake (SEE) spectrum for the dam, or the expected peak earthquake ground motions occurring with a return period of 10,000 years, that governs the safety assessment and seismic design of the structure.

It is the first time precariously-balanced rocks have been used to set formal design earthquake motions for a major existing engineered structure.

As the researchers report in the Bulletin of the Seismological Society of America, the peak ground acceleration for the new SEE spectrum, developed from the rock data as well as an updated seismic hazard model for the region, is significantly reduced compared with preliminary estimates developed in 2012.

However, the new design ground motion values are similar to those used—by chance—when the dam was built in the 1980s.

“There is nothing that needs to be done in the way of dam strengthening,” Professor Stirling says.

“However, the study shows all the relevant authorities that the dam is compliant given the modern regulations.”

The study also serves as an important proof-of-concept for future applications of fragile geologic features (FGFs) in engineering design.

FGFs are especially useful in setting engineering design parameters in places where the period between relevant earthquakes is very long—10,000 years or more. In these cases, the geologic features can help test probabilistic seismic hazard estimates.

While seismologists have explored the usefulness of these features for other engineering design projects, such as the cancelled Yucca Mountain nuclear waste repository in Nevada and the Diablo Canyon power plant in California, the Clyde Dam is the first to use fragile features to set design ground motion.

On a broad plateau located southwest of the dam called Cairnmuir flat, outcrops of schist rock that stick up above the landscape are carved by erosion into potentially unstable configurations.

In a painstaking effort, the researchers identified these precariously-balanced rocks and took field measurements of their geometries to estimate their fragility. Then the researchers analysed the formations using radionuclide data that estimates how long a rock surface has been exposed to the atmosphere. These data can offer an estimate of how long a rock has been balanced in a specific position.

“In terms of data collection, it was the FGF age estimation that was most challenging,” Professor Stirling says.

“It required specialist input, hard physical work, and there were usually large uncertainties in interpreting the dates to say how long the FGFs had been fragile.”

By combining these data with information on past earthquakes along the nearby Dunstan fault, the researchers concluded that the rocks at Cairnmuir flat had been poised in their unstable position for at least 24,000 years. This suggests that all of them have survived at least two Dunstan fault earthquakes.

They then developed a fragility distribution of all precariously-balanced rocks in their study, based on peak ground acceleration, to determine the peak ground accelerations most likely to topple any random fragile rock structure with greater than 95 per cent probability. This information then helped to recommend a new SEE spectrum for the dam site.

Based on our preliminary probabilistic seismic hazard calculations for the site, “we knew that the FGFs in the area would be knocked down by these strong ground motions if they occurred—it’s easy to roughly estimate the fragility of the features by eye in the field”, Professor Stirling explains.

It was then only a matter of time and research, he added, before the new Clyde Dam hazard estimates were revised.