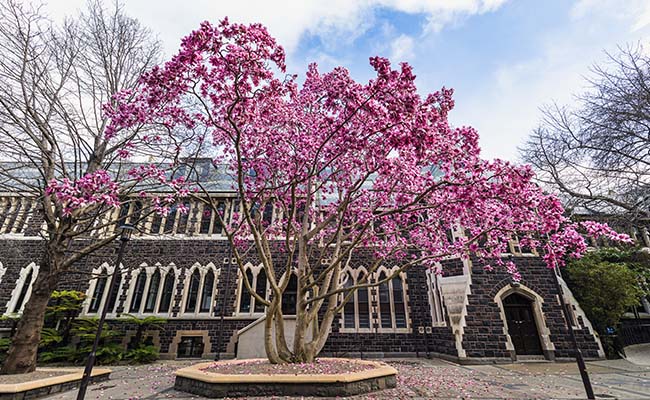 The magnolia tree in full bloom.

Shortly before New Zealand entered Alert Level 4 this August, the first signs of spring were starting to pop up on the Dunedin campus. One of these was the first bloom of the beloved magnolia tree – a now celebrated tradition dubbed as “Magnolia Day”.

If there’s any area this tradition means the most to, it’s the Department of Geology.

Positioned in the courtyard between the Clocktower and the Department of Geology building it’s only natural that the department’s John Williams was the one to officially start recording the date of the first bloom in 1995. That tradition has since been carried on by Hamish Bowman, Computing and Numerical Simulation Technician in the department.

Though the tradition for the wider University ends there, those in the department take an extra step.

“We’ve got a month of August calendar we keep in our tearoom. Everyone writes down what date they think it will bloom.” says Hamish.

As the month of August creeps forward you’ll often see students peeking out the windows to keep tabs on the tree. This year master’s student Kaeli Lalor was the first to spot the bloom on 9 August. By the next day it was fully open and the rest of the tree gradually followed suit.

Hamish notes that the competition is very informal. The prize for the winning prediction in their first year was a cookie.

Still, especially for the students, keeping up with the magnolia is a great way to de-stress as the end of the semester approaches and study intensifies.

Though informal, Magnolia Day continues to serve as an example of the simple traditions that make University life special both within the department the tree is closest to and for the wider University community.