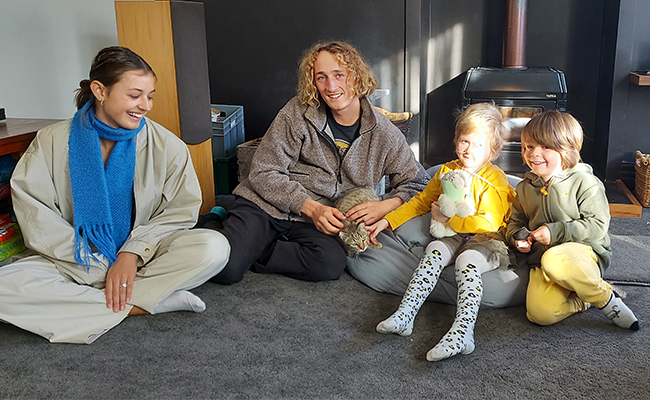 A kitten that crept out of the bush has connected Otago students with a Dunedin family in need of some “pure, uncomplicated love.”

The story began when a third-year Geology class undertook a field trip to Dansey’s Pass earlier this year and returned to Dunedin with a tiny survivor as an extra passenger.

Geology student Euan McLaren: “One evening we were toasting marshmallows sharing stories of the day’s excursions, and Lucas noticed the kitten tucked away in the nearby long grass on the riverbank. The kitten was convinced to come out and quickly became friendly and was passed between many hands. 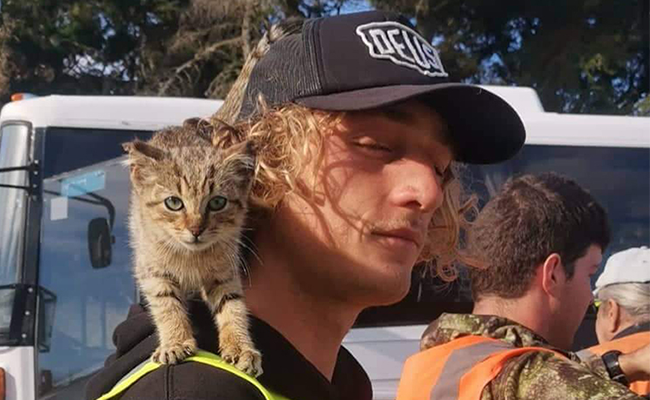 “It was given a bed for the night in the shelter of Lucas’s tent fly, but had gone by morning. But the following night it returned, and we were surprised by the kitten’s friendliness as it ran between people and loved climbing on shoulders. The kitten spent another night in Lucas's tent and was still there in the morning and stayed close – it even featured in the class photo!

"Neither Ayla or River would have survived without the kindness of others. In Ayla's case her medical team, blood donors, her family, friends and wider community. In Te Awa's case the students who rescued her, to whom I'll be forever grateful, and the people involved in Cat Rescue" - Ayla's mother Yvonne Bohn

“I ended up boarding the bus with River (the kitten’s new name) who seemed very happy, and my girlfriend’s flat gave River a home for the next week. It was very well behaved and even used the litter tray straight away.

"They were unable to keep it so delivered it to Cat Rescue Dunedin and we were assured she would be adopted.”

Fortunately for River, a Dunedin family, who had also been through difficult times, was looking for a kitten.

Yvonne Bohn continues the story: “Our seven-year-old daughter Ayla was diagnosed with leukaemia at the start of May last year. She had a pretty bumpy start to her treatment, spending two months in Christchurch hospital and even a short stint in ICU due to life-threatening side effects.

“She is now doing well and has progressed to the 'maintenance' phase of treatment. However, at risk of her having a severe case of COVID, our family made the choice to go into a self-imposed lockdown.

“Since we were at home, it was a perfect time to adopt a kitten, so I was keeping an eye on the Cat Rescue Dunedin Facebook page. When I met River, I could see her outgoing personality would be a great fit for our family. We kept the name River and use it interchangeably with Te Awa (Māori for River).

“Te Awa has settled into our family beautifully. She gives us all so much pure, uncomplicated love. She is exactly what our family needed after the year we've had, and we're able to give her the attention and love that she seems to crave.

“Neither Ayla or River would have survived without the kindness of others. In Ayla's case her medical team, blood donors, her family, friends and wider community. In Te Awa's case the students who rescued her, to whom I'll be forever grateful, and the people involved in Cat Rescue.” 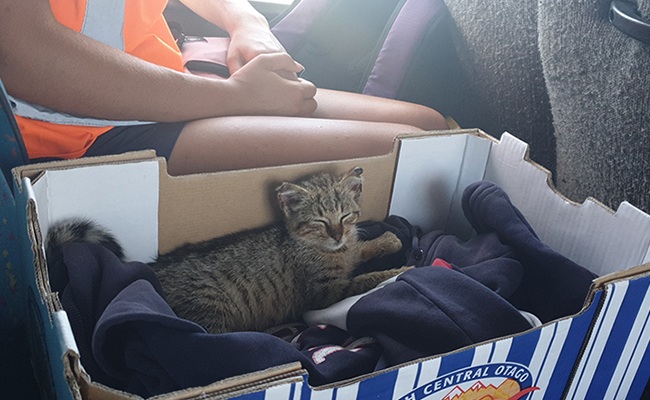 Recently the University communications team reunited Euan and his girlfriend, Ruby Denee, with Te Awa and her new family, and Euan said it was obvious River had grown into an adventurous and playful cat.

“We were made very happy by the stories the family shared and Ayla even showed us some tricks she had taught River, such as jumping through a hoop she held in the air,” Euan says. “It was very heart-warming to hear that she had brought some joy to the house during some tough times, and it was obvious River had found the perfect home.”

The last words for this heart-warming story are reserved for Ayla, who says: “River is special because she's a survivor like me; I survived cancer and she survived the wild.”