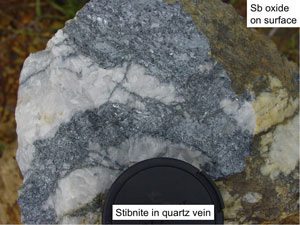 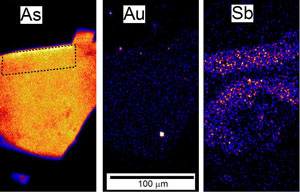 Figure 4. PIXE images (by B Petrie, and C Ryan) of an arsenopyrite grain. Coloured dots represent variable concentrations of elements. The shape of the grain can be seen in the left view which shows the arsenic distribution. The right view shows scattered antimony. The sample is from a gold mine, and gold grains are visible in the central image.

The principal sources of antimony in these mineral deposits are:

Mineral deposits that have been examined as part of this programme include: 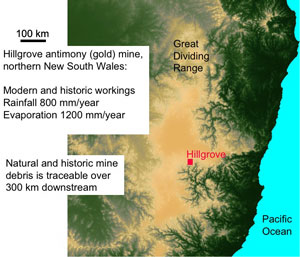 Figure 5. Aerial view of the location of Hillgrove mine in NE New South Wales. The mine is above the steep gorges of the Great Dividing Range, in the Macleay River catchment. The dark sinuous gorges of this catchment extend from the mine to the Pacific Ocean. 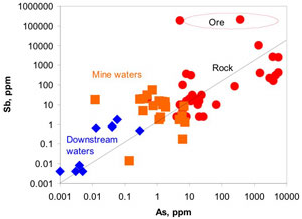 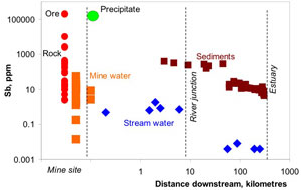 Figure 7. Concentrations of antimony in rocks and sediments from Hillgrove mine down the Macleay River catchment to the Pacific Ocean. "Precipitate" represents brown iron oxyhydroxide material that has been deposited from mine waters. This material is extremely rich in Sb. Precipitation of the material is instrumental in extracting Sb from the mine waters before they discharge into the environment. Elevated Sb in Macleay River waters 300km downstream from the mine results from dissolving of Sb from sediments that were discharged from the mine historically. Natural Sb-rich sediments occur in the river also, from erosion of stibnite-bearing rocks.

Figure 8. Electron microprobe images (by N. Wilson) of historical (100-year old) mine tailings at Endeavour Inlet antimony mine. The images show concentrations of antimony (left) and arsenic (right). Prominent equant grains are stibnite (70 wt%) Sb) and arsenopyrite (45 wt% As). Stibnite also contains up to 5 wt% arsenic. Diffuse lower Sb and As distributions in the images are due to rainwater dissolution and redeposition associated with iron oxyhydroxide. 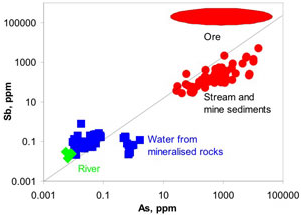 Figure 9. Comparison of antimony and arsenic concentrations in rocks, sediments, and waters downstream of Endeavour Inlet mine tunnels. Diagonal line represents equal amounts of Sb and As. Ore from the mines is strongly enriched in Sb, but sediments and some waters are relatively enriched in As.

Figure 10. Three-dimensional block diagram of the Endeavour Inlet antimony mine area, showing groundwater movement through the antimony-bearing rocks. The amounts of antimony and arsenic discharged to the environment from mine tunnels are shown at top left. Total discharge of antimony and arsenic from the river is shown at bottom right. Nearly all the Sb and As discharge is from natural groundwater dissolution. 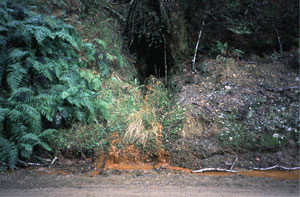 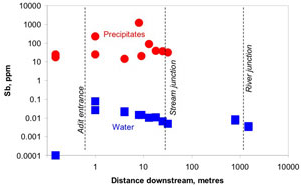 Figure 12. Antimony content of waters and brown iron oxyhydroxide precipitates, Reefton area. The precipitates are effective at removing most of the Sb from the water before it discharges into nearby streams.

Sulfide minerals stibnite (Sb2S3) and arsenopyrite (FeAsS) are unstable in the presence of atmospheric oxygen. They decompose, and antimony forms oxide minerals or goes into solution.
This is summarised in the following diagram, that shows the principal chemical reactions that occur during decomposition of stibnite. The oxide minerals commonly form a white coating on the outside of stibnite samples. This white coating is soluble in rainwater and river water, up to about 50 parts per million (10,000 times drinking water limits). 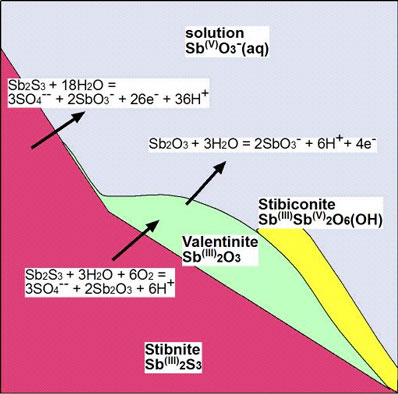 See also "Mobilisation and dispersal of antimony from antimony-gold mineral deposits in circumneutral pH waters: environmental consequences in Australasia" by Ashley, Craw & Tighe, presented at the International Sb Workshop in Heidelberg, Germany, May 2005