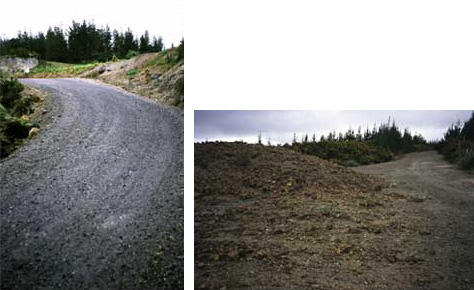 Characteristic features of rocks and drainage at Puhipuhi 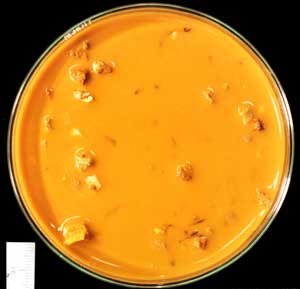 Sample of typical orange-stained water which flows from rocks in which marcasite and pyrite (iron sulphides) are decomposing in rain water.The orange pigment (iron oxide) forms when acid water mixes with clean water. Mercury and arsenic can stick to the orange pigment, removing these pollutants from the water. However, the mercury and arsenic may be picked up by other waters at a later time. 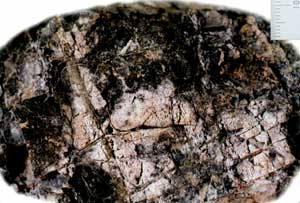 Greywacke (pale) and argillite (black) have been altered (bleached) by hot spring waters moving through fractures. The hot water left behind a deposit of marcasite in some fractures (indicated in rectangle). The marcasite is dark coloured, but fresh surfaces sometimes look brassy-yellow. Broken marcasite has a sulphurous odour. 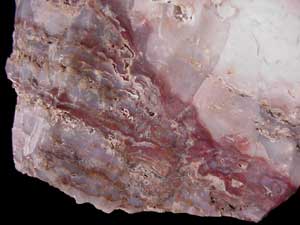 Pale quartz-rich rock deposited on top of the basalt by surface hot springs at Puhipuhi. The spring water also deposited cinnabar (red mercury sulphide) as thin layers in this rock. Cinnabar consists of about 80% mercury, but it is a stable mineral and does not break down in rain water. Hence cinnabar is not a potential pollutant. 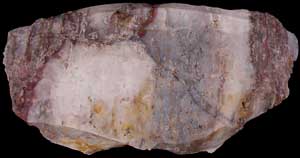 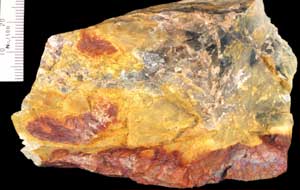 Same rock specimen as above, showing the outside surface. The yellow-brown stain on the rock surface is formed as the pyrite and marcasite decompose in rainwater to jarosite (yellow sulphate mineral) and limonite (brown rusty iron oxide). 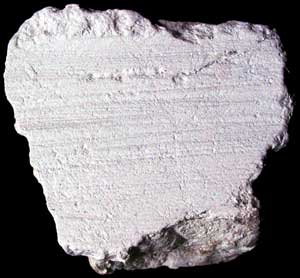 White clay formed from greywacke as hot spring waters moved through fractures. The clay is very soft and washes away in heavy rain. Dark specks are marcasite (iron sulphide). 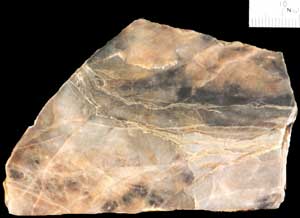 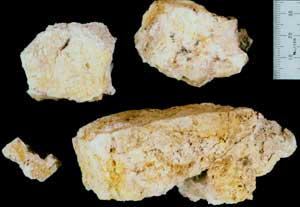