Wangaloa coal mine restoration (closed mine)

The mining industry faces challenges in satisfying societies that demand a way of life requiring mining products and yet also place high values on their natural environment. Coal mine restoration projects increase public perception of mining companies, increase rehabilitation standards across the industry (thus decreasing opposition to future mining projects), and produce models, techniques and solutions that may be employed in other mine restoration efforts.

New Zealand has relatively few examples of completed opencast mine rehabilitation projects. Although extensive investigations have been performed on overseas mine sites, New Zealand's climate, geology, terrain, coal chemistry and vegetation are unique and therefore require separate study. This study seeks to obtain an understanding of the environmental processes that occur during establishment of native vegetation on essentially bare ground during coal mine rehabilitation. One of the principal aims of the research programme is to use the Wangaloa site as a pilot study and obtain as much information as possible about successes and failures during rehabilitation, so that other sites can be rehabilitated at lower cost.

Aerial view of Wangaloa coal mine

The Wangaloa open cast coal mine is located near Kaitangata in southeast Otago. The mine operated from 1945 to 1989, producing 750,000 tonnes of coal.

As a requirement of the mining licence, Solid Energy New Zealand has prepared an end of mine life plan (EOML) for Wangaloa, which details the rehabilitation process of 75 hectares of disturbed land and waterways. The process involves the following steps: stabilisation of the overburden, re-vegetation of the central mine area, establishment of walking tracks, preservation of some mining relics, and creation of a beach to allow public access to the lake. 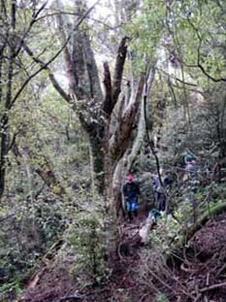 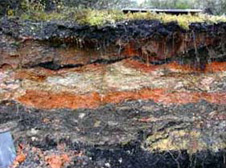 2: Evidence of coal fires in Wangaloa overburden-orange material is from natural coal fires, stripped from above the coal during mining.

The mine site has been developed in the 60 million year old Taratu Formation, that consists mainly of quartz gravels with minor sands, silts and muds, and coal seams. The Taratu Formation at Wangaloa has been extensively eroded over the past 5 million years, as the area lies between two active faults that are causing localised uplift via periodic earthquakes. Low sea levels during the last glacial period (about 14000 years ago) exposed glacial silt (from the nearby Clutha River) near the shoreline and this was blown onshore to form a blanket of silt (loess) over the topography. Coal exposed at the surface went on fire at several localities, probably because of spontaneous combustion of piles of eroded fine coal at outcrops. These coal fires burnt for decades, or possibly hundreds of years. Fires spread during dry seasons into surrounding forest, temporarily removing much of the vegetation cover. Subsequent rainstorms caused deep and sharp incision of creeks into the quartz gravels and associated coal. Resultant gullies were partially filled with silty loess, quartz gravels, and burnt coal residue, washed off the hills as slurry-like debris flows and landslides.

The mine area has undergone numerous cycles of catastrophic change and recovery after earthquakes, fires and landslides. The present cycle of mine excavation and rehabilitation is just the latest of these cycles.

Pre-human vegetation is likely to have been a lowland coastal forest with a variety of forest types, determined by the topography of the terrain. The drier slopes, ridges and spurs would have supported extensive stands of totara, kamahi and rata, with the wetter slopes and poorly drained areas being dominated by podocarp/broadleaf forest (predominantly rimu and kahikatea). Areas cleared by coal fires would probably have been colonised initially by tussock grasses, manuka and bracken which eventually gave way to the mature forest community, a pattern that can also be seen today (see photo above).

Research on the Wangaloa site is being done by Prof Dave Craw (geologist) and Dr Cathy Rufaut (Research Fellow, ecologist).

The research has been supported by Solid Energy NZ.