The following is an abstract from a paper presented at the Australasian Institute of Mining and Metallurgy, Nelson, NZ conference, August 2004.

Oceana Gold (NZ) Ltd's, Macraes Gold Operation currently has two tailings impoundments, the larger of which covers approximately 75ha. When an impoundment is temporarily out of use, the surface dries and dust can be blown from the surface to the surrounding area. At present water spraying is used to stabilise the surface, but this is not ideal as Macraes mine can experience water shortages during the summer. This paper examines an alternative method of surface stabilisation using vegetation as a ground cover. The tailings have a low natural fertility, so it is important to determine what will actually grow in the tailings, and whether amendments are necessary. Also important is the effect of the amendments on arsenic mobility in the tailings as the schist rock at Macraes has naturally elevated levels of arsenic. Three plants species, rye corn, barley, and lupin, were grown in metre-deep lysimeters at Macraes mine site. The plants were grown in unaltered tailings, and tailings with one of two amendments added, Bioboost (an organic fertiliser containing biosolids), and superphosphate fertiliser. The leachate from each lysimeter was collected and analysed monthly to determine the extent of arsenic mobility. In addition, laboratory experiments were set up to determine arsenic mobility in tailings with amendments at the centimetre scale.

All plants grew best with the fertiliser amendment, with rye corn growing the best overall. Plants growing in unaltered tailings either barely survived (rye corn, barley) or died (lupin). Plants in the Bioboost amended tailings grew only slightly better than in the unamended tailings. Laboratory experiments indicate that the addition of phosphate fertiliser greatly increases arsenic leaching at the centimetre scale when compared to unamended tailings. The addition of Bioboost only marginally increases arsenic leaching, compared to unamended tailings. This trend has not been repeated in the lysimeter trials on the metre scale over four months. Current results suggest that of the plant types trialed and amendments used, rye corn with superphosphate is the most practical short-term tailings stabilisation method at Macraes.

The following is a summarized version of the paper.

This study further examines surface stabilisation using vegetation as a ground cover (phytostabilisation). The schist rock at Macraes contains naturally elevated levels of arsenic and sulphate therefore for plants need to be tolerant of these factors. Plants will need to establish themselves quickly before the surface of the dam dries out and a hard crust forms. The tailings as a plant substrate have low natural fertility with low concentrations of essential nutrients such as phosphorous, so it is important to determine what will actually grow in the tailings and whether amendments such as fertiliser are needed. Plants for this study were chosen on the basis of an earlier glasshouse trial (hyperlink). These were:

Another important aspect of this study was to determine the effect of amendments on the mobility of arsenic. Phosphorus is physically and chemically similar to arsenic and will compete for As sorption sites in the tailings, and as such the addition of phosphate fertiliser could increase leaching of arsenic from the tailings. Previous studies have found that the addition of P amendments increased the uptake of arsenic in, for example, Chinese Brake Fern (an arsenic hyperaccumulator).

Large plastic containers (lysimeters) were filled with tailings from the main tailings dam. These lysimeters had a pipe attached near the base for leachate sampling (see photos below). The lysimeters were either left as unamended tailings, or amended with either 5g of superphosphate or 5g of Bioboost (an organic fertiliser containing biosolids). The three plant species were sown at a rate of 5g of seeds for each lysimeter. Control lysimeters were also set up with either unamended or amended tailings but with no plants growing in them. There were three replicates of each treatment. All lysimeters were watered regularly as required to sustain plant growth. 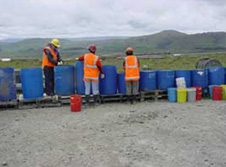 1. Setting up the lysimeter field trial 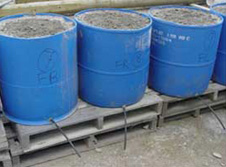 Plants were harvested on the final day of leachate sampling. Shoots, roots and seeds were collected separately. All plant material was thoroughly washed, dried and weighed to determine biomass.

Super phosphate, another fertiliser (Cropmaster 20), and bioboost were added to separate test tubes containing dried tailings material and distilled water, at varying rates from 15g/m2 (comparable to the lysimeter trial), to 200g/m2. Water in the test tubes was analysed for arsenic after 1, 3 and 5 months.

The effect of the amendments on all three species of plants became more pronounced over time. Initially in the first few weeks after plants there was little difference between plants of the same species growing with difference amendments. After two months, rye corn started to show a marked difference in growth with different amendments. Rye corn grew best with the fertiliser amendment, its growth in straight tailings was very poor with the Bioboost amendment only marginally better (see photos). 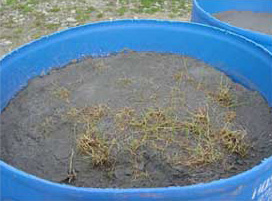 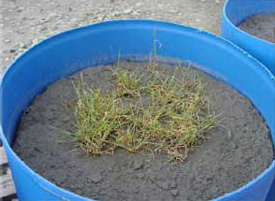 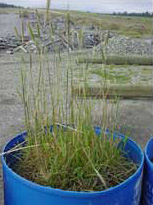 Much of the biomass was in the shoots and roots. The rye corn with fertiliser formed a dense mat with short shoots and a tight interwoven root structure which trapped tailings material.

The differences in the growth of barley were not as extreme with different amendments as rye corn. Barley plants also grew best with superphosphate, worst with tailings and only marginally better with Bioboost, although barley grew better in unamended tailings and tailings with Bioboost than did rye corn. Seeds accounted for a large proportion of the biomass in the fertiliser and barley combination (Table 1).

After one month of growth, lupin plants in all lysimeters appeared to be healthy, small (5-10cm tall) plants. Between the first and second month of growth however, over half of the lupin plants had died. The remaining plants were discoloured and had lost most of their leaves. Lupin plants in all but two lysimeters (both with the fertiliser amendments) had died by the third month growth, with the few surviving plants looking very unhealthy.

In the lysimeter experiment, major ion concentrations (Na, K, Mg, Ca, Cl, SO4 and alkalinity), conductivity and pH of the leachates did not differ significantly with different amendments. The average concentration of sulphate in the leachates was much higher than the tank water (by around 4000ppm). (see figure below) 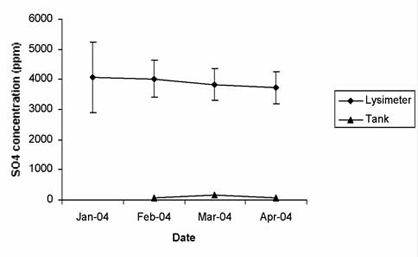 Average SO4 of lysimeter leachates compared to tank water SO4 concentration

Results from the lysimeter experiment showed no significant difference between different amendments and their affect on arsenic leaching. In fact the average arsenic was lower with added fertiliser which may be a consequence of better plant growth and increased arsenic uptake. This contrasts to the laboratory experiment where the presence and amount of P increased the leaching of arsenic into solution. The principal difference between the lysimeter trial and laboratory experiment is the scale: the laboratory experiment involved 2-3cm of tailings in a test tube compared to a metre depth in a lysimeter. With a larger volume of tailings, there are more As sorption sites in the soil, eg. clays and Fe oxyhydroxides, reducing the competition between As and P. These results indicate that fertiliser-induced As leaching is not likely to occur on a large scale- as in the tailings impoundment which is approximately 80m deep. 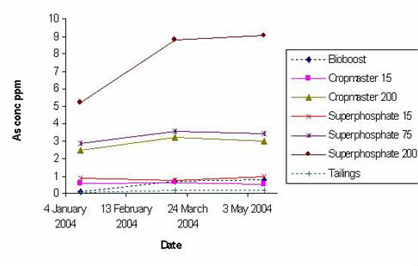 Average concentration of As in leachates with different amendments 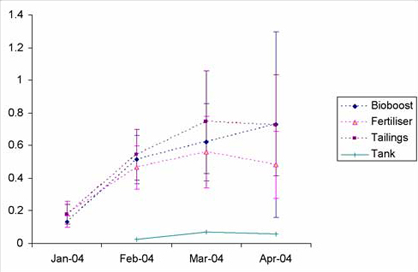