This study- a glasshouse trial

This study addressed the issues of temporary phytostabilisation of tailings material. By means of a greenhouse trial, the most useful species and amendment regime for use on an actual mine site were identified. Gold mine tailings were used as the principal growing medium, with organic matter and fertilizer amendments. This study set out to examine (1) the feasibility and efficiency of establishing a plant cover directly on tailings using commercially available grass and legume seeds, (2) how the plants respond to additions of commonly used soil amendment products, namely compost and fertilizer and (3) levels of metal uptake in plants grown in tailings, particularly arsenic. Topsoil from an undisturbed location within the mine site is included to serve as a comparison to the tailings data.

All species were sown directly into the potted substrates.

The winners- Barley and Rye Corn

Barley and Rye Corn were found to offer the best potential for successful temporary phytostabilisation of the Macraes tailings dam surfaces. These two grasses initially germinated well, grew relatively quickly, flowered and seeded in the unamended tailings substrate. However, the successful and sustainable long term use of tailings as a complete growing medium without some kind of amendment appears doubtful. The early flush of plant growth observed in the first two weeks was followed by increasingly frequent symptoms of nutrient deficiency and shoot tip necrosis. The inability of tailings to retain a non-limiting supply of water in the surface layers for early plant establishment is a fundamental restriction. Gold mine tailings typically restrict root growth and make plants vulnerable to desiccation, and the high salt concentration of the tailings from Macraes would also add additional stress. 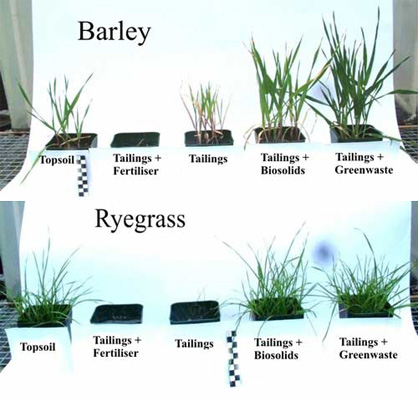 Photo showing differences in growth between Barley and Ryegrass in the different treatments.

The performance of nitrogen-fixing Red Clover and Lucerne in the unamended tailings was poor relative to the grasses. Although there is a strong benefit in establishing N-fixing plants on mine substrates the unique characteristics of the fresh tailings at the Macraes mine site does seem to support their early establishment. There are a number of factors that may be responsible: legumes rank amongst the most sensitive plants to arsenic toxicity. Nitrogen-fixers also tend to require high levels of available P which was exceptionally low in the tailings material.

The pot trial demonstrated that nutrient and physical limitations to plant growth inherent in Macraes tailings were overcome through application of organic compost material. Average biomass per pot was up to four times greater in compost-amended tailings than unamended tailings. It also showed that any effects of As toxicity were negligible in the compost-amended tailings, with plants of all species growing vigorously, including the legumes.
The benefits of adding organic matter to this tailings system are two fold:

In this study, the amount of mineral P fertilizer (equivalent to 800 kg P/ha) was applied in order to intentionally trigger As mobilization. A subsample of water leachate from one fertilised pot per plant species showed that consistently higher levels of As were detected in comparison to pots of unamended tailings. A high application rate of phosphate fertilizer to tailings greatly suppressed plant germination and growth in all species. It is likely that phosphate-induced mobilization of As resulted in phytotoxic conditions that caused the suppression of all plant germination and growth.