Revegetation of Gold Mine Tailings (Active mine - Macraes gold mine)

Revegetation of mine wastes is now common practice as part of mine site remediation strategies, directed at establishment of permanent plant cover, for stabilization and aesthetic reasons. Selection of suitable plants is site specific and influenced by the local climate, and aesthetic preferences of regulatory authorities. Native or locally acclimatized plants are commonly chosen for this type of long-term revegetation in order to re-establish an ecological situation similar to that prevailing before the mine was developed. Species which naturally colonise mine sites are ideal indicators for the types of species to examine further in revegetation projects.

Vegetation of tailings can also be environmentally beneficial in the short term by reducing wind-borne erosion and transport of dust and potentially toxic materials into nearby water catchments. The effectiveness of this type of vegetation is determined by: 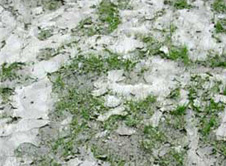 Grass growing in cracked surface of gold mine tailings

The amendment of which can be extremely difficult because of the physical problem of gaining access to the growing surface on partially dewatered tailing slurries.

Unlike many mine tailings, those used in our study are not acid and have low base metal contents, but they do have elevated arsenic concentrations. Our results are therefore applicable to similar mine sites elsewhere in the world, particularly those developed in metasediment-hosted quartz vein gold deposits such as those of Victoria (Australia), California (USA) and Nova Scotia (Canada), as well as some Archean greenstone gold deposits such as those of Western Australia, Ontario (Canada), and Barberton (South Africa). 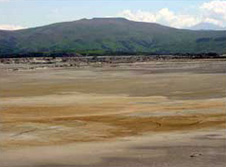 3. Tailings impoundment at Macraes Mine 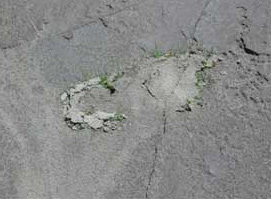 4. Establishment of grass in a footprint on the tailings impoundments

The Oceana Gold Macraes gold mine is located 80 km north of Dunedin, and is New Zealand's largest producer of gold, producing over 175, 000 ounces per year. Construction of the mine began in 1989, with the mine life expected to be 25-30 years, with the total resource at Macraes estimated at over 6 million ounces.

This large open cut mine was opened in 1990 on a site which had been mined underground historically for gold and scheelite. The mine is developed in a thick (>100 m) zone of mineralised rock, with pyrite and arsenopyrite dispersed through quartz veins and associated schist, and abundant scheelite in the quartz veins as well. This mineralised zone is oriented northwest-southeast, and is traceable for about 30 km. The Macraes mine is located in the central portion of this zone, and eight pits more than 100 m deep have currently been excavated over several kilometres. More extensive excavations around this part of the zone are planned and further exploration is being undertaken in the area. Excavation of the Macraes mine pits involves extraction of large volumes of waste rock from above the ore, and this has been dumped as nearby piles, some of which are over 2 km long and 1 km wide. Some filling of disused pits with waste rock has also occurred. The waste rock contains pyrite (FeS2) and minor arsenopyrite locally. The schist that dominates the waste rock contains calcite (calcium carbonate) that ensures any acid from oxidation of pyrite is neutralised and any discharge waters have near-neutral pH. Gold is closely associated with the sulphide minerals pyrite (FeS2) and arsenopyrite (FeAsS) in the ore, so initial processing involves crushing and separation of a sulphide mineral rich concentrate. This concentrate is then crushed more finely and gold is extracted from ore by cyanidation. The residue is discharged as tailings behind purpose-built dams and into a disused mine pit. The tailings are a mixture of sand and silt, and are discharged as a wet slurry. Water from the slurry accumulates on the top of the tailings, from where it is recycled through the processing plant. The tailings have built up to a pile nearly 100 m thick behind the mixed tailings dam. Tailings have essentially the same chemical composition as the ore, less the gold, and typically contain 0.1 to 1% arsenic. The tailings contain calcite from the schist, and additional calcite is added in the processing plant, so acidification cannot occur in the tailings. Dissolved cyanide residues in the tailings waters are readily decomposed by ultraviolet light in the shallow pond on top of the tailings before the water is recycled.

Tailings in the impoundments are periodically exposed to strong dry north-west winds, and dust plumes up to 1 km long can occasionally emanate from the tailings. Some temporary stabilization of dried tailings surfaces can be achieved by sprayed water, but this treatment needs constant repetition, and depletes water resources. Consequently, temporary vegetation has become a focus for surface stabilisation. Initial field trials by the mining company involved seeding the tailings surface with grasses and clovers from a helicopter. Initial germination was encouraging, especially in desiccation cracks (see photo below), but survival rate was low and nearly all plants had died within 3.5 months.

The vegetation of Macraes Gold Mine tailings is continued research born from an initial study on glasshouse screening trials, conducted by a team from the University of Otago's Departments of Geology and Geography, in 2003 as part of the Environmental Science Programme. This study determined:

Leading from the results of this study was Dusk Mains’ Geology honours project on Arsenic Mobility during Vegetation of Gold Mine Tailings. This study looked at further phytostabilisation trials of tailings using of barley and rye corn, along with an N-fixing lupin in 1m deep barrels (lysimeters). Here amendments of an organic fertiliser containing biosolids and a superphosphate fertiliser were trialled. Dusk looked at the effects of the amendments on arsenic mobility in the tailings.

The Macraes mine tailings are in an exposed setting. The tailings are regularly swept by strong dry winds, and the site can be freezing in winter and hot in summer. The weather is extremely changeable and all four 'seasons' can occur in a single day. 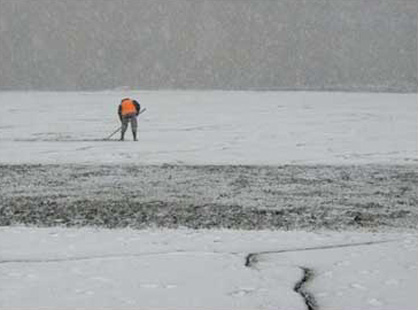 An attempt at establishing plants on newly-exposed tailings occurred in August 2004. The seeds were planted in a hail storm (right), which provided some moisture in the following days. Germination occurred rapidly. However, a period of strong northwest winds in September buried some o the struggling seedlings in migrating dunes, the roots of the rest of the seedlings were exposed by wind erosion, and the plants died. 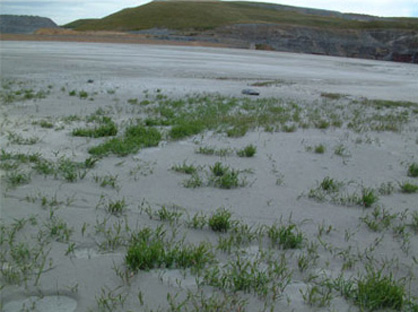 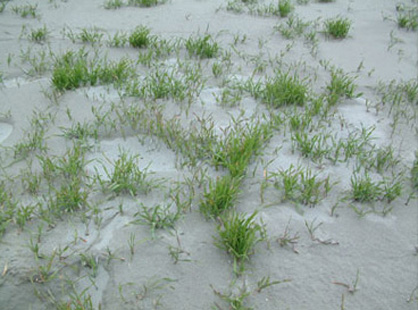 Close up of above, note the patchy distribution of plants because of wind effects. Photo: Oceana Gold

Further planting occurred in December 2004. Fortunately the weather was damp and calm, and the seedlings rapidly became established. Windy days caused redistribution of some seed.