Soils at Wangaloa (closed coal mine)

Maps of soil pH have been constructed at three stages through the rehabilitation process. The first map, below, was constructed after initial prepartaion of the site in January 2003. 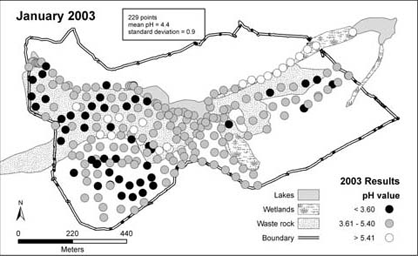 January 2003: This map shows that most of the site is moderately acid, including some undisturbed areas. Strongly acid areas occur principally on mined areas, particularly those with remnants of coal waste. 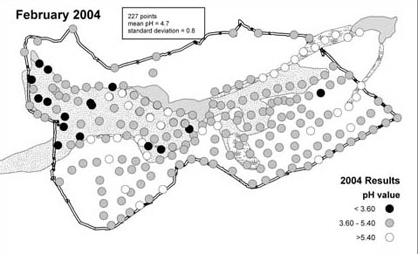 February 2004: A resurvey of the site a year later (in 2004) shows a general decrease in strongly acid soils, but the site has remained moderately acid overall. 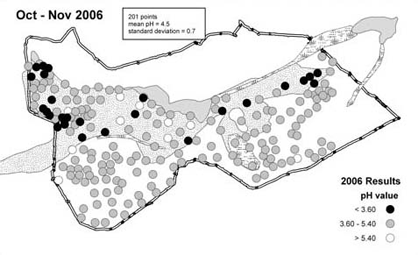 Oct-Nov 2006: By the end of 2006, there was a slight resurgence of strongly acid spots on the site, especially at the western end where coal waste lies on the surface. This acidity probably arose from pyrite that was exposed by recontouring earthworks in the early stages of rehabilitation. Otherwise, the site has shown a general decrease in acid soils since the first survey in 2003. 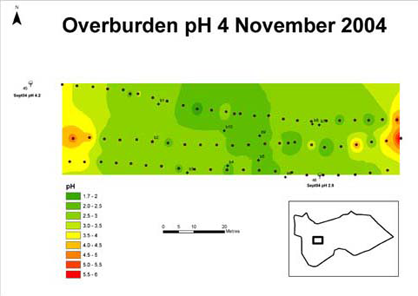 Overburden pH, Nov 2004: The low pH on this slope has arisen because a trackload of overburden with abundant pyrite was tipped over the slope near the end of the mining activity in 1989. This overburden consisted of quartz gravels from immediately above the coal seam. These quartz gravels had been cemented with pyrite by groundwater coming from the coal. This slope has been selected for additional studies of acid neutralisation, using limestone and coal ash. 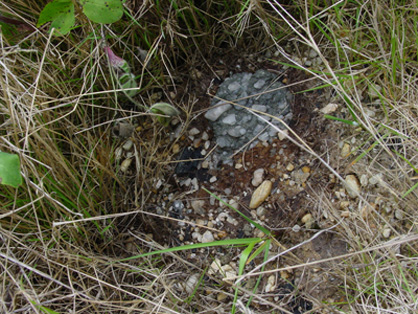 The photo shows a 10cm block of this material (slightly above centre). The acid from the pyrite (grey-yellow colour between white quartz pebbles) has killed the grass within a 10 cm radius of the block.

Boron in soils can also be taken up by plants and cause poor growth or death. Some Pine trees originally planted on the Wangaloa overburden had high levels of boron in their needles. The graph below shows that trees with poor growth had higher boron, but also lower nitrogen, than trees showing good growth.

Native plants established during rehabilitation on coal-rich waste rock take up more boron than the same species on other substrates, as shown with the graph below. 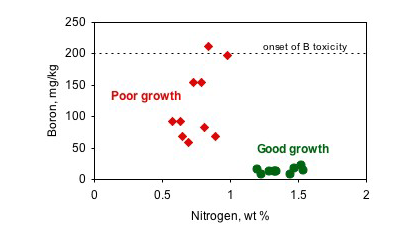