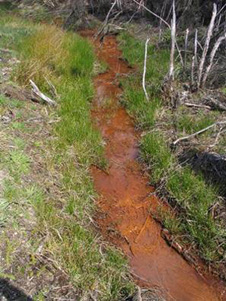 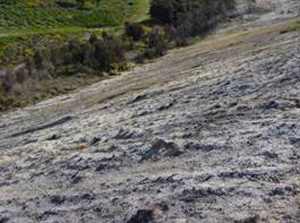 2. Unvegetated waste rock at Wangaloa coal mine. The white quartz conglomerate contains pyrite, which oxidizes and acidifies the surface and drainage waters. The acid substrate inhibits revegetation. (pH hear near 2) 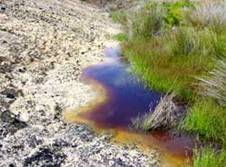 The Wangaloa coal mine is located in southeast Otago. Mining at Wangaloa began in the 1940s, and ceased in 1989. The principal seam mined at Wangaloa (Barclay Seam) is up to 9 m thick and traceable for several kilometres through the mine area (Harrington 1958). This seam, and some overlying coal seams, was mined underground historically immediately to the south of the opencast mine site.

The coal is high rank lignite, with relatively high sulfur (2-5 wt%). Sulfur is distributed through the organic component of coal and there is abundant pyrite (FeS2) scattered through the coal. Pyrite is particularly abundant near the top of the main mined seam and as a cement in quartz conglomerate that immediately overlies that seam. Exposed coal surfaces, in outcrop and in waste clasts, are commonly coated with white gypsum (CaSO4.2H2O) and yellow jarosite (K-Fe sulfate). Oxidation of the pyrite generates acid waters, and acid mine drainage resulted at the base of waste rock piles. In 2003, substrates had moderate acidity (pH = 4.5 ± 1) with some distinctly acid patches (pH down to <2).

When the open cast coal mine ceased operations in 1989, only minor rehabilitation was attempted, with plantations of Pinus radiata. A major rehabilitation programme was initiated in 2002 with removal of exotic vegetation, and extensive planting (>60 000) of native seedlings was begun in 2003. By 2006, most seedlings were thriving and a 70% vegetation cover had been achieved.

Incoming stream and rainwater  has pH 5-6 and low dissolved ion concentrations. Chloride is the most common anion, derived from marine aerosols blown inland from the nearby Pacific Ocean. This water has chemically interacted with acid substrates in the mine, especially waste rock piles that contain pyrite-bearing material, and has evolved to lower pH (pH down to 3.4), sulfate-rich waters. The sulfate concentration is locally very high (hundreds of mg/L). These waters drain into the main lake at the site.

Relative proportions of the major ions in waters at the Wangaloa coal mine.

The main lake on the site was formed in the deepest part of the mine after the mine ceased operation. This lake receives most surface and groundwater runoff, and this lake controls the site discharge water quality. Waters in the main lake are more dilute than the typical waste rock waters because of input of direct rainfall and surface runoff.

The main lake pH varies on a monthly time-scale from 4.5 to 6.5. These variations are related to variations in acid groundwater flow from waste rock piles. In addition, there has been a general increase in pH of the lake during rehabilitation from consistent pH 4.6-4.8 before rehabilitation to near pH 6 during rehabilitation. These changes in lake water composition from year to year are a result of increased input of rainwater that has had less interaction with acid substrate because of increasing vegetation cover. 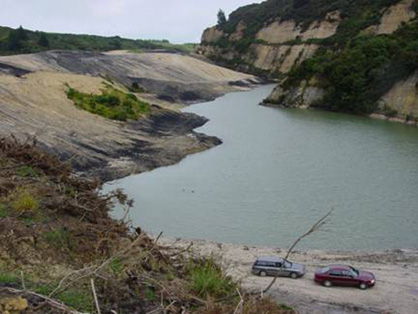 Main lake at Wangaloa coal mine, with original coal-bearing strata on right, and waste rock piles on the left. 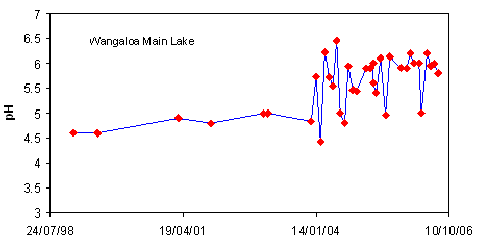 Variations of pH with time in the main lake at Wangaloa coal mine. Major revegetation started in 2002